This is the message I preached on Easter at St. Timothy Lutheran Church. The gospel text was Luke 24:1-12. 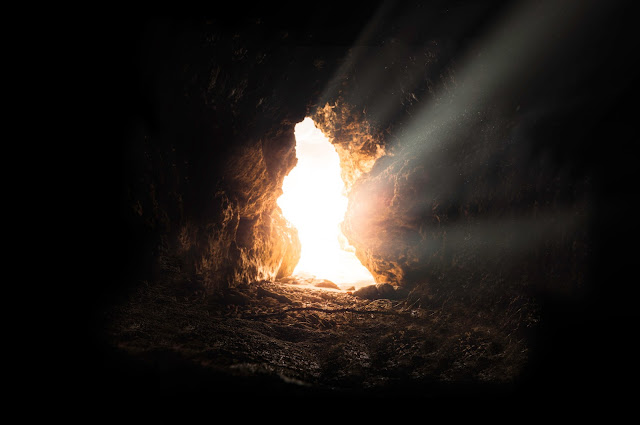 The women in today’s gospel were doing what women did in that time; they were going to prepare Jesus’ body with spices to help cover the stink of death. But there was a problem—no body. Let’s follow these women to see how they became the first evangelists and testifiers of the resurrection; going beyond their confusion with the absence of a body to boldly witnessing to the other disciples.

They saw the empty tomb and two angels. This is certainly not what they expected. They had come with spices to anoint a dead body, but there was none to be found. The angels set them straight about the mystery of the missing body of Jesus.

They heard, the angels’ words, “Why do you look for the living among the dead?” What do these angelic messengers mean? The living? “He is not here, but has risen.” How were they to get their minds around that? Luke didn’t mean just any of the living. “The living” is better translated from the original Greek as “the one who is living” or “the living one.” This focuses our attention on one specific person, the Lord Jesus, THE LIVING ONE.

Why do we look for “the living among the dead?” As the saying goes, “The devil we know is better than the devil we don’t know.” We want to cling to what we know (death) instead of entering into what we do not know (resurrection). We tend to follow the status quo rather than risk the unknown.

Resurrection is counter-intuitive. Resurrection turns the world upside down. As Professor Anna Carter Florence says, “if the dead don’t stay dead, what can you count on?” They are supposed to stay dead, aren’t they? Resurrection throws off the balance, upsets the apple cart, and generally turns our neat and tidy lives totally out of whack. If we don’t find resurrection a little hard to believe, we probably aren’t taking it very seriously.

After the angels’ urging, they remembered the words Jesus had told them about his death and resurrection “while he was still in Galilee;” since the beginning of his ministry. Remembering, for Luke, has to do with a re-presentation of a past event in such a way that understanding, insight, awareness and perception are included as well as simple recollection (John Petty).

The women testified by telling the other disciples all they had seen, heard and remembered. The others did not believe the women’s testimony. Luke says the other disciples  discounted their words as “an idle tale.” In that day, women were seen as being prone to gossip and stories, tales. We understand this phrase, but it’s not in use much today. An alternate translation is “pure nonsense.”

Like many of us, the other disciples were slow learners. Resurrection faith came slowly to them. But when it did come—it changed everything! In the Book of Acts, Christ’s followers were “These people who have been turning the world upside down” (Acts 17:6). That’s what resurrection, life-giving faith does.

Wherever you find yourself on the continuum of faith, don’t feel badly. Jesus’ closest friends dismissed the women’s message as drivel and fairy tales. Christ is raised amid the chaos of real life, with darkness, doubt and even despair, not in a fairy tale world where everybody gets it. Christ is raised and to be praised even as we struggle to figure it all out.

Are we prepared to be perplexed when our reality does not match our expectations?  Are we prepared to have traditional symbols transformed? What memories do we recall so that we learn to seek the living One rather than the dead? (Holly Hearon)

Bad news permeates our world, and we have bad experiences. However, we declare that there is a sustaining power, God, who brings life out of death and reconciliation out of conflict, just as scripture says. I cannot help but think of Ukraine and Russia when I hear of conflict and reconciliation, and I continue to pray for them and others who find themselves in the midst of war that understanding will triumph over conflict.

Clarence Jordan, founder of Koinonia Farms, from which Habitat for Humanity emerged, wrote, “We should worry less what people say they believe happened 2000 years ago and more whether we are living as if resurrection still happens. The question is, ‘How are we partnering with God today in transforming despair into hope, apathy into compassion, hate into love and death into new life?’”

What if, having heard it and believed it, we actually began to live like it was so? Such life propels and strengthens us in painting, singing, praying, teaching, building hospitals, digging wells, campaigning for justice, caring for the needy, loving our neighbors as ourselves. These things last into God’s future.