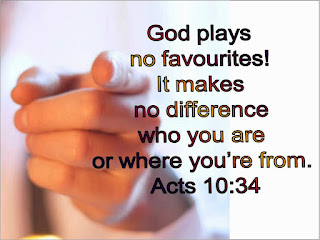 This is the sermon I preached on Sunday, 1/8, Baptism of Our Lord at St. Timothy Lutheran Church. The scripture text was Acts 10:34-43.

What in the world does this passage from Acts have to do with the Baptism of Our Lord? Jesus' baptism was the signal that his ministry should begin. It was when the Father gave Jesus the assurance that he was the beloved Son and commissioned Jesus. God's message was incarnate in Christ, God's message was preached by Peter and the other apostles and God's message of God's inclusive love is to be shared by us as well.

The first words of today's reading from Acts are, "Peter began to speak..." (v. 34). We struggle so much with sharing our faith with others. More often than not, we are associating with people who are like us--economically, racially and culturally. We do not encounter nearly as many barriers as Peter did. Yet, if we open our eyes beyond our neighborhoods, we will see many needy people who are far different that we are.

God sent Peter to a household very different from his own; culturally and racially. A fisherman was sent to a soldier, a Jew to a Gentile. Peter says he understands that "God shows no partiality" (v. 34). What brought Peter to Cornelius' house and how did he come to that conclusion about God's impartiality?

In the beginning of this chapter of Acts, Peter had a vision, the gist of which was that God wanted Peter to go to a Gentile home and share the good news. God was saying, "I have breaking  news. The gospel is not just for the Jews, but for the Gentiles also!"

Peter and his companions went to Cornelius, as witnesses to the truth, just as God had told Peter. In spite of Peter's statement about God's impartiality, later in Paul's letter to the Galatians, we see Peter more concerned with the opinion of some Jewish believers, than he is with the inclusivity of the gospel. It was such an issue that Paul had to publicly correct Peter.

God has no favorites. This means that no ethnic, geographical, cultural or moral barriers are any longer in the way of anyone and everyone is offered forgiveness and new life.

Peter shared the message of Jesus with Cornelius. Peter uses an interesting phrase: "You know the message [God] sent to Israel..." (v. 36). The whole point of Peter's sermon is that Cornelius and his household do not know what has happened. After all, that's why Peter was sent! If we look at those who first read Acts, they knew and we know, but Cornelius certainly did not know.

Peter summarizes Christ's mission as "the message [God] sent to the people of Israel, preaching peace by Jesus Christ" (v. 36). Jesus' earthly mission was primarily aimed at the people of Israel. Jesus preached peace in the face of Roman oppression.

As Peter goes through the geography of the Good News, he notes that Jesus' ministry began, "after the baptism that John announced" (v. 37). The beginning of Jesus' ministry was tied to John the Baptist.

Peter summarized the public ministry of Jesus in this way: God anointed [Jesus] with the Holy Spirit and power. Jesus does not act on his own. Jesus is God's agent so he did good and healed all oppressed by the devil. As in the gospels, Jesus' healings were portrayed as an assault on the power of the devil, not solely errands of mercy.

Peter then summarized the death and resurrection of Jesus (vv. 39-40). Jesus appeared to his disciples and ate and drank with them after his resurrection.  A great example of this was when Jesus met the two on the road to Emmaus, who recognized him through the breaking of bread.

The appearance of the risen Lord culminates with his command to proclaim the gospel. Jesus leaves his disciples with the promise of the Holy Spirit to guide and empower them after his ascension. This promise finds fulfillment in Cornelius and his household and bursts through boundaries to include all God fearers.

After the summary of Jesus' ministry comes the statement, "we are witnesses to all that he did" (v. 39). Jesus commanded those he had called as witnesses  (v. 41), to testify. Testify means witness, which comes from the Greek, martyrein. From this word comes the word martyr. Not very encouraging, is it? Most of Jesus' apostles died as martyrs. The invitation to witness was an invitation to come and die with Jesus.

After our passage from Acts, we see the power of the Holy Spirit as such that while Peter is still speaking, the Holy Spirit comes on Cornelius and his household. Before Cornelius could respond verbally that he believed, God powerfully demonstrated that Cornelius and his household had become children of God. I love the way God demonstrates what He says, "...everyone who believes in him receives forgiveness through his name (v. 43).

In the final verse, the reference to the prophets shows that the Christian message is not a break with the past, but the continuation and fulfillment of God's plan revealed in the ancient scriptures.It was important to emphasize this in presenting the gospel to Gentiles [and people today] who did not know the Old Testament, who are too inclined to misunderstand Jesus as simply a significant personality, a great teacher, or a wonder worker. In Acts, the Christian message is integrated into the continuing plan of God for all history.

As writer N. T. Wright notes, "God is not simply accepting us as we are. He invites us as we are; but responding to that invitation always involves the complete transformation which is acted out in repentance, forgiveness, baptism, and receiving the Spirit" (N. T. Wright, Acts for Everyone). God invites us to be part of his plan. In baptism, we are washed clean, made God's child, filled with the Holy Spirit and commissioned to proclaim the good news.

God shows no partiality, which is difficult for all to hear who have been socialized to think in terms of an us/them mentality. That God loves and accepts "them" as well as "us" is part of the scandalous good news of the gospel. This news is too good to keep to ourselves. Let's share God's message that the world may know of Jesus and his love.