When I'm So Blue

The people of Israel were in a really bad way. Psalm 80 is a psalm of lament, the psalmist’s response to the trouble. Diving together into the psalm, we will find comfort. The feelings expressed mingle with our own as we allow God to be with us in our sufferings, when we are blue. I’m not trying to put anyone on the spot, but is there anyone here who has never suffered pain and sorrow at some time in their life? If so, I’d like to see your hand. That’s what I thought.

This psalm is one of communal lament. People broke with their normal routines, assembled at sanctuaries, offered sacrifices, lamented their distress and pleaded with God to intervene on their behalf. Psalms of lament follow this pattern: 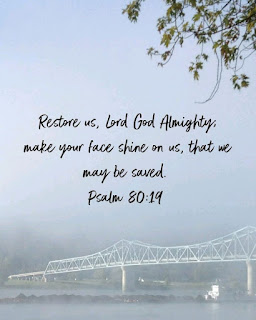 God
We have a problem
Why have You allowed this to happen to us?
How long do we have to put up with this?
We know that You can do something about it
You ought to do something about it, because
(We have history together)
(You promised us)
(You will look bad if you don’t)
(You are our only recourse)
When You have done something about it, we will praise you. (Brooks Schramm, Spirituality: Toward a 21st Century Lutheran Understanding)

God is addressed as the Shepherd of Israel. This means that God is a God who must oversee his people with great care, concern and tenderness. God made them and God better take care of them! Not only that, but God is praised as being splendid on the cherubim, savior of the tribes of Israel and of the cosmos. In a sense, the psalmist is challenging God to be what he is supposed to be or is he just trying to butter God up?

We have a problem. Scholars think this psalm originated in the devastation of the northern kingdom in 722 BCE and then others bring up the issue of Judah’s (the southern kingdom) pending devastation in the 6th century BCE. These bookends of Israel’s misery are the points of origin for a psalm seeking salvation.

Why have You allowed this to happen to us? How long do we have to put up with this? Where is God? These people are so far down that they complain that God is even angry with their prayers. That’s some accusation, isn’t it? Rather than feeding them with bread and providing water, they claim God is feeding them with the bread of tears and giving them tears to drink. It doesn’t sound like a very good shepherd. Don’t we sometimes feel that way?

How long? The psalmist feels like the people’s prayers are never answered. Their prayers don’t seem to help their situation at all. It’s like the expression of the heavens being as brass.

God is accused of bringing misery and suffering on them and failing to function as a good shepherd should. The people feel that rather than protecting them from their enemies, God has become their enemy. Their plight was so bad that neighbors made fun of them and their adversaries ridiculed them. Just as they see their hope is in God, they attribute their misery to God as well. (John H. Hayes, Preaching Through the Christian Year A).

I am reminded of the character Tevye in “Fiddler On the Roof.” With his troubles, he says to God, “I know, I know…we are the chosen people, but once in a while can’t you choose someone else?” Do we sometimes feel like that? For just as God created and sustained the people of Israel, we are created and sustained by God.
We know that You can do something about it. The people petition God to remember and support his people, Israel. After all, they occupy the place of honor at God’s right hand. They are God’s creation and responsibility.

You ought to do something about it, because (We have history together) (You promised us) (You will look bad if you don’t) (You are our only recourse). There seems to be a bit of bargaining here with God on the part of the people. How often we too use this tactic.

When You have done something about it, we will praise you. It’s incredible that so many times God’s people of old and we today will praise God, but only after God has acted. Much of this psalm has had to do with pleading for divine help, reminding God of God’s responsibilities to the people. And then, the second to last verse comes along, “Then we will never turn back from you; give us life, and we will call on your name” (v. 18). “Oh God, if you only do this, then we’ll be good. We promise.”  Really? The people of Israel were like little kids in some ways and so are we.

“This psalm utters a simple and primal cry: O God, help!” (Walter Brueggemann, Texts for Preaching: A Lectionary Commentary Based on the NRSV-Year A). We join with ancient Israel, begging that God will save us now and in the future. We have suffered and “the one at your right hand” is Christ, whom we have been waiting for throughout Advent. We call on his name (v. 18). He is Immanuel (Isaiah 7:14).

Did you notice the repeated use of the pronouns “us” and “we?” This is a psalm, a prayer for the whole community of God’s people, as the psalmist writes, “your people’s prayers” (v. 4). Entire communities, even our own community of faith may need God’s intervening love. In a little while, we will be praying together the “prayers of the people.”

Now all of the wes in the pattern for lament psalms can be turned to I’s. Make this psalm your own, a personal rather than communal prayer.

God may not deliver us from the hard circumstances we experience as individuals, families, or a country. But God will be with us, carrying us like the shepherd carries the hurt sheep, holding us close while we are in pain.

There’s an old song from my 1970s non-denominational, charismatic, Elim Bible Institute past that you’re likely unfamiliar with, but while I was preparing this message it was running through my mind. I’d like to share the last verse and chorus with you:

When we have exhausted our store of endurance,
When our strength has failed ere the day is half-done,
When we reach the end of our hoarded resources
Our Father’s full giving is only begun.

And all God’s people said, Amen!