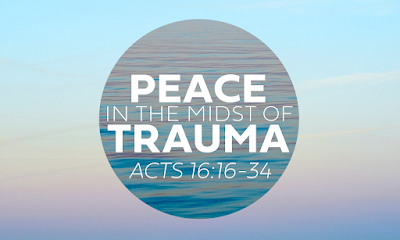 We live in violent, scary times. Don’t we sometimes want to throw up our hands and give up when we hear about yet another mass casualty event? Last week it was the Buffalo shooting and now another school shooting, this time in Uvalde, TX. Doesn’t it seem like week after week we hear of another disaster affecting so many people—a shooting rampage, fires, floods and let’s not forget COVID, which is not finished wreaking its havoc. Our hearts break within us as we cry out with the psalmist, “How long, O Lord?” Life is hard today, but it was a difficult world that Paul and Silas found themselves in in the Book of Acts.

Today’s text consists of four scenes: Paul and Silas’ exchange with a girl controlled by a spirit, the disciples get thrown into prison, their miraculous release from prison and the conversion of the jailer and family.

We take up the story with our heroes in prison. I don’t know about you, but if I’m in trouble, I try to fly under the radar, but not Paul and Silas. They pray and sing and praise God–and this was at midnight! I’m sure some prisoners didn’t appreciate that, especially if they’d just gotten to sleep. Well, they’re awake now and couldn’t help but hear the two singing. The prisoners were actually listening to them, according to Luke’s narrative.

The missionaries were not doing this because they felt particularly cheerful or religious. It was an expression of praise to the God who continues with them in their mission and allows them to suffer for his name. They were not singing to be set free—if we do this, God will do that. Deliverance comes at God’s initiative, not because they knew how to pray properly. Paul and Silas did not preach to their captive audience, but their response to their troubles was a testimony to the Christian faith to the other prisoners.

To release Paul and Silas, God uses such a violent earthquake that it rocked the foundations of the prison, thereby rocking the jailer’s and the prisoners’ world. Jailbreak time, right? No, rather than going for a jailbreak, Paul and Silas inform the jailer that not only were they still there, but so are the other prisoners. The jailer’s life was at stake if the prisoners escaped, which is why he was ready to kill himself.

The jailer asks, “What must I do to be saved?” This question operates on two levels: in the context, the jailer is asking what to do to save his skin. We’ve heard similar requests in the gospels, so we know that the real request is for salvation, offered by the gospel.

The answer: “Believe on the Lord Jesus.” This is Luke’s summary of what is required of human beings in response to God’s act in Christ. It’s not the first step in a “plan of salvation,” but is the whole answer to the jailer’s question. It includes faith in Jesus as Lord and Christ, turning away from sin, commitment to doing God’s will, baptism and incorporation into the Christian community and living in the service of God. Elsewhere in Acts it’s called repentance, turning to the Lord, becoming obedient to the faith and believing in God. It does not mean merely holding the opinion that something is true, but is a matter of personal trust and commitment.

Not only is the jailer saved, but his entire household as well. It’s interesting that Jesus had warned that families would be split over one’s devotion to him. However, in Acts, households are consistently united as Christian families.

After some instruction, the jailer and his family were baptized. They went to the jailer’s house and ate and rejoiced together at the jailer becoming a believer. I’ve wondered about these words and why it just speaks of the jailer, but if he hadn’t come to faith in Christ, the rest of the household would not have believed either. Since all were baptized, they had obviously believed. What began as an ominous jailing ends as a joyous celebration of faith. Through role reversal, Paul and Silas become the jailer’s deliverers.

What kind of prison are we in? Are we overwhelmed by fear because of all the craziness in our world today? Do we worry that what happened at the Tops in Buffalo might happen here, when we’re in the store? Are we finding ourselves more suspicious of strangers we encounter? If so, we are in a prison of sorts. But our God excels at jailbreaks!

I don’t mean we should be indifferent to dangers around us, but we cannot let them consume our thoughts and minds. After all, if we’re so preoccupied with what might happen to us, how can we care for and love our neighbor?