This is the sermon I preached two Sundays ago at St. Timothy Lutheran Church. The text was Luke 10:38-42. 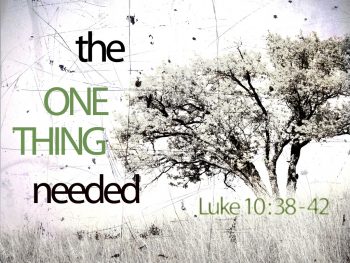 Ah, another story that we know. It’s not only familiar, but we’re pretty sure we know what it means, don’t we? Devotional books tell us to be like Mary and not like Martha, but is that what this gospel says?

This episode begins with a journey motif, tying this scene to the preceding one, of last week’s Good Samaritan. This is part of Jesus’ journey to Jerusalem. Here Luke highlights the overarching concern with extending or refusing hospitality to those on the road.

The fact that this is Martha’s home tells us that there is no man around as head of the house. We have no mention of Lazarus, but because of the similarity to the Gospel of John’s telling of this scene, we can assume these two women are Lazarus’ sisters.

Being Martha’s home tells us about her status. Martha is portrayed as one of the women who supported Jesus and his mission from their own resources (8:1–3).

Of course, the disciples would be listening to Jesus and in a completely counter-cultural move, Mary, a woman, sat at Jesus’ feet and listened to him. She is acting like a disciple and women were not supposed to be that. They were to busy themselves with housework and children. She had inserted herself into a situation that would have been  all male.

Martha had good reason to be upset. The original language of the Greek indicates there was “simply too much to do” as an objective fact, rather than Martha being stubborn (sundaysandseasons.com). With Jesus as nearly de facto household head, Martha rightly goes to him with her concern.

When I lived in Bethlehem with my then husband and kids, with our co-workers, we annually had a Christmas Feast for Muslims. It lasted three days, because that’s how long feasts were supposed to be. We baked and frosted hundreds of Christmas cut-out cookies. Half a room was taken up with trays full of cookies.

During the feast, we cooked maqluba, a traditional rice and chicken dish. You should have seen the size of the pot the rice was cooked in. It was enormous. Our coworker, David, used to kiddingly say it was big enough to cook missionaries in.

It was cold out (and in, but that’s another story), so we kept the kettle on for hot tea. As hosts, we were to wait on our guests, unlike having a large buffet. Over the course of the three days, we served hundreds of meals. Four of us were staff and we normally got help from those visiting us for Christmas, but it was still exhausting.

Since Jesus is travelling with his disciples, it is likely that the meal is for Jesus and his followers. The type of work Martha was doing indicated she was cooking. Has Jesus - or any of the commentators and preachers on this text - ever actually prepared a meal for 15 or 20 people? Try doing that without being worried and distracted by many things! (David Ewart).

How does Jesus answer Martha? “Martha, Martha, you are worried and distracted by many things; 42 there is need of only one thing. Mary has  chosen the better part, which will not be taken away from her.” The issue is Martha’s worry and distractedness, being unfocused, not tuned in. Yes, there is work demanded of good hospitality, but what about her guests? By repeating her name twice, Jesus shows compassion for Martha pointing out her worry and distraction over “many things.” Those “many things” may have extended beyond the scope of the necessary chores of hospitality. She struggled between the good, doing chores and the best, listening to her Lord Jesus.

Sound of static while tuning in radio. Isn’t the static aggravating? It seems no matter how you try, you just can’t get tuned in to the radio station you want. Aren’t our lives with God sometimes like that? The great difference between tuning in the radio channel and tuning in to God is this. Tuning in to the right radio station at times takes effort. Tuning in to God is not a matter of our work, but the work that God has already done in Christ, reaching down to us. We need only respond.

The church was successful in its mission of spreading the gospel mainly because of  women followers like Martha and Mary who not only worked together in households, but among households that were in competition. The church succeeded in mission because their women leaders were so good at both hearing and doing, as well as offering hospitality. STANLEY P. SAUNDERS

Any church that is “worried and distracted by many things” (v. 41) will become a community dwelling in the shallows of frantic potlucks, anxious stewardship campaigns, and events designed simply to perpetuate the institution. Decisions will be made in meetings without a hint of God’s reign. Food and drink will appear at table without Christ being recognized in the breaking of bread. Social issues may be addressed, but the gospel is missed in acts that partake of politics as usual (Cynthia A. Jarvis). God save us from being that church.

In a few minutes, we will welcome Manuel Creed Strudwick into the body of Christ through baptism. Listen to the challenging words of this liturgy. Open your hearts to remember your baptism afresh. Children of God, you have been sealed by the Holy Spirit and marked with the cross of Christ forever.  Let’s live like it. Amen!