This is the sermon I preached on Sunday, August 7 at St. Timothy Lutheran Church. The gospel text was Luke 12:32-40.

Do you remember the game show, “Let’s Make a Deal?” On the show, guests choose between various doors concealing contents. In the beginning of our gospel are three doors we, the contestants, can pick from. Rather than numbers, they have words on them. 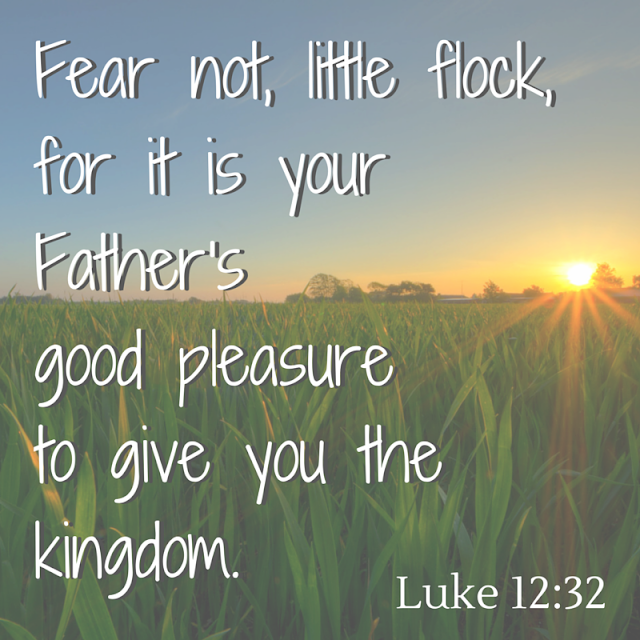 Door One is, “Kingdom,” Door Two is “Sell,” and Door Three “Purses.” So, we find out a bit about what’s behind the doors, but not much.

Let’s check out Door One, “Kingdom.” The host opens the door and we see more. “Do not be afraid, little flock, for it is your Father’s good pleasure to give you the kingdom.” Oh, Jesus gives the kingdom. It’s not something we have to work to get. Even with nothing in our hands, we can have the kingdom because the king has us. The whole kingdom. Yup. Children of the King live in the kingdom here and now and in the future. Door One’s pretty good then. Let’s check out the others.

Door Two, “Sell,” is certainly not very inviting once we open it, “Sell your possessions and give alms.” I like my possessions. I enjoy the smart TV my son got us. Likewise, I like the air conditioners that run when the humidity is inescapable.

Door Three says, “Purses” and then inside states, “Make purses that do not wear out, an unfailing treasure in heaven.” How cryptic. I’m not very crafty, so this doesn’t appeal to me. But, is Jesus talking about literal purses that were money bags in his time? Actual purses would wear out. What about “an unfailing treasure in heaven?” What does Jesus mean?

We need to go back to Door One to understand. We have no reason to fear because God delights in giving to God’s children. Because of what God’s given us, because of all we have, which is immense, we CAN sell possessions and give alms. The word translated “alms” comes from a word meaning “mercy.” So this is more than just throwing a donation to the poor, it means being merciful to those in need. That’s helpful for Door Two.

What is all the purse stuff about behind Door Three? Besides what seems like crafts, making purses must have something to do with kingdom life because listen to what follows. They don’t wear out. Then Jesus talks about heavenly treasure, “where no thief comes near and no moth destroys.” It’s eternal, like God. Because it’s from God, it reflects God’s nature.

Verse 34 sums it all up concerning playing Let’s Make a Deal with God. “For where your treasure it, there your heart will be also.” This is not a command or exhortation, but a simple statement of fact. People’s hearts are in fact where their treasure is. In our world, those who have their finances and property invested in secular and selfish pursuits can hardly claim their hearts belong to God.

The next scene references a wedding banquet. This reflects typical weddings of the time and, to a certain degree, Palestinian Muslim weddings today. I had the privilege of attending one. The men went to the groom’s home, and the women were all at the bride’s. And we waited and waited and waited. Someone would hear a noise and think it was the groom, but it wasn’t. Then there’d be another sound, but that wasn’t him arriving either. Finally, he did arrive and the wedding proceeded.

Here is but one of the reversals throughout Luke. Instead of the servants serving the groom when he returned, the groom served them. Jesus did that when he washed his disciples’ feet. Rather than being served, the bridegroom/Son of Man will serve his disciples at the messianic banquet in the heavenly kingdom. Faith that Christ is the crucified man of Nazareth reverses all our expectations and common sense values.

Concerning the homeowner and thief, the issue of being prepared is highlighted. At an unexpected hour, the Son of Man arrives. Jesus is portrayed as a thief because we never know when he could come. How odd! The time of the end cannot be predicted, so we must always be ready.

How does this apply to my life today? Are we grieving, like the friends and family of Arden Johnson? Maybe we’re struggling financially, or we’re worried about our children, our political situation in our country, war or the many disasters abroad and at home.

Jesus gives his followers the whole enchilada, the kingdom of God, which is anyplace God is, including in us. We are living in the kingdom in the now and not yet. Christ is with us now through baptism and reminds us of his presence in the holy supper and by fellowship with God’s people, by worship and prayer.

The saints that have preceded us in death are with God in a dimension we have not entered, the not yet. Concerning that, Paul wrote, “What no eye has seen, nor ear heard, nor the human heart conceived, what God has prepared for those who love him” (1 Cor. 2:9).