This is the sermon I preached on Sunday at St. Timothy Lutheran Church. The gospel text is Luke 16:1-13. 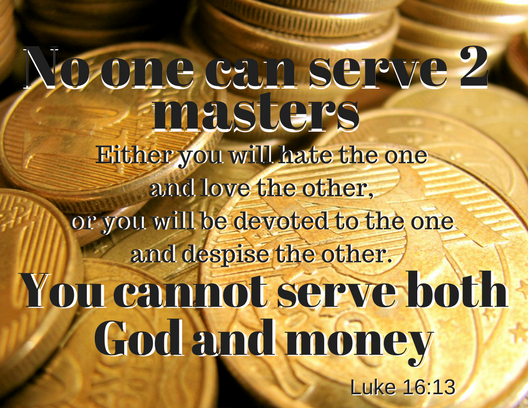 Jesus seems to be messing with our minds in today’s parable. It has been likened to a watermelon coated in Crisco being used as a football. It can be played with, but you just can’t get a hold of it. Like that slippery watermelon, parables are meant to keep us on our toes.

This parable is familiar and puzzling to most of us. What do we do with phrases like, “I tell you, make friends for yourselves by means of dishonest wealth so that when it is gone, they may welcome you into the eternal homes.” No matter how we try to look at it, we just can’t get it to make sense.

Society and relationships in Jesus’ day were based on honor and shame. If you had someone over for dinner, you invited someone of a higher rank than yourself, with more honor. This way you were showing honor to your guest and by having him over, you received honor. It would be like us having someone famous come to our house. It’s an honor for us.

Let’s retell the story from the perspective of first century society in Jesus’ day. A rich man had a manager that was accused of “squandering” his boss’ property. Whether it was true or not, this shamed the rich man. Two scholars explain, “His honor and status in the community are threatened by the public perception that he cannot control his employees, so he resolves to save face by immediately dismissing the employee” (Landry and May, “Honor Restored: New Light on the Parable of the Prudent Steward Luke 16:1-8a”).

The manager is summoned by his boss. Because of these accusations, shame has now fallen upon him. He must act quickly. The boss wants an accounting of everything. The manager is ruined unless he can find a way to restore the master’s property. He won’t be able to get work as a manager anywhere else—not with his bad reputation.

He says he couldn’t dig, which probably referred to digging in the mines, slave work, which was almost always a death sentence. After all, he was educated. He could read and write. He just wasn’t suited to that kind of labor. And begging would just bring him even more shame. What should he do?

He decides to give a deep discount to all the master’s debtors. In that way, they will be indebted to the manager, they will owe him, which restores some honor. One scholar explains:

People would assume that the steward was acting on the master's orders, so these gestures would make the master look generous and charitable in the eyes of society. The prestige and honor gained by such benefaction would far outweigh the monetary loss to the master. (Landry and May, “Honor Restored: New Light on the Parable of the Prudent Steward (Luke 16:1-8a).”

The manager needed a way out of his predicament—a way to have the shame taken away and his honor restored. Then he would be golden. The debtors AND the rich man would all be grateful to him.

The master hears what the manager has done and praises him for his actions. It’s not just about the olive oil or the wheat. The issue is that the manager restored his master’s honor. He actually made the master look good. Honor and prestige outweigh the monetary loss. Now the manager had options. He could work for another master, since his own reputation for loyalty and good service has been restored. Honor trumped wealth.

Perhaps the most puzzling phrase in this parable is, “Make friends for yourselves by means of dishonest wealth.” Is Jesus calling us to bribery and dishonesty? We need to understand that for Jews in that day, all wealth beyond one’s needs was considered tainted or dishonest. This is meant to encourage responsibility for those in need. It’s a matter of neighborliness, of being a caring community, like we have here at St. Timothy.

The challenge to us from the parable is who is our boss? Who do we follow? Who is our master? Is it fashion? Food? Drink? Sex? Fear? Are we enslaved to our own desires for recognition and acceptance?

The bottom line for us is what God is saying to us as the people of God gathered here today around Word and Sacrament. The final verses ring out the message clearly-- “No slave can serve two masters; for a slave will either hate the one and love the other, or be devoted to the one and despise the other. You cannot serve God and wealth” (v. 13).

You may be a construction worker working on a home

But you're gonna have to serve somebody, yes

You're gonna have to serve somebody,

But you're gonna have to serve somebody.

Who will we serve?