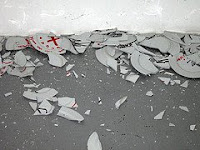 Summer Greek 2008 ended yesterday. And a sigh of relief was heard from all. We have had some marvelous cheerleaders throughout the process--previous years' students, profs. We've had ice cream socials, picnics and prayer. The 2 weeks was concluded with a celebratory Greek dinner last night, followed by a round of plate smashing. The stress levels were high in the intense 2 weeks of whirlwind, head spinning study of Greek. We stood on the patio of the refectory (dining room) for the plate smashing. Plates were smashed in honor of our class, spouses, the profs etc.

Our class has been divided into 2 groups based on grades and where we would fit best. There is the rabbit group and the turtle group. I am happily a turtle. The pace will be such that what didn't stick in our brains during the fast pace of Summer Greek will have a chance to stick. We were reminded of the old proverb, "Slow and steady wins the race." I couldn't help but think of this video as an expression my feelings about being a turtle.

Law+Gospel said…
What a great video pick! Glad you survived- never any doubt. I hope you get some needed R & R- see you on campus on Tuesday!
Sunday, August 31, 2008

Ivy said…
Thanks. I think our commiseration together and resulting cohesiveness helped. Yesterday and today I have been a lazy bum, other than more unpacking and going to church. Look forward to seeing you Tues. Peace.
Sunday, August 31, 2008