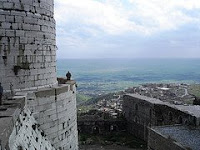 Not being brought up Lutheran, one of the great joys of being involved in a teaching parish is reading and studying Luther's Large Catechism with my mentor, Rural Pastor. This week we were studying the Lord's Prayer. As I read Luther's comments at home in preparation for Sunday, I experienced one of those "Aha" moments. When I shared my discovery with Rural Pastor, he agreed and said he had not seen the connection before, so let's see what you think.

This is regarding Luther's explanation of the third petition of the Lord's Prayer, “May your will come about on earth as in heaven" (p. 448, "Large Catechism," The Book of Concord).

For where God’s Word is preached, accepted, or believed, and bears fruit, there the holy and precious cross will also not be far behind. And let no one think that we will have peace; rather, we must sacrifice all we have on earth—possessions, honor, house and farm, spouse and children, body and life…Let them all rage and try their worst…Against them a simple Christian or two, armed with this single petition, shall be our bulwark, against which they shall dash themselves to pieces. (pp. 448-449)

The boldened words are those that really struck a chord with me. I could not help but think of the hymn, "A Mighty Fortress is Our God." Then I wondered which came first, the catechism or the hymn? Do we see the seeds in the catechism that germinated into the hymn? The answer may well be in the affirmative because the catechism was published in early 1528 while the hymn was written in 1529. Here is the hymn and see what you think.

A Mighty Fortress Is Our God
Martin Luther, 1529
Translated by Frederick H. Hedge, 1853

A mighty fortress is our God, a bulwark never failing;
our helper he amid the flood of mortal ills prevailing.
For still our ancient foe doth seek to work us woe;
his craft and pow’r are great; and armed with cruel hate,
on earth is not his equal.

Did we in our own strength confide, our striving would be losing;
were not the right man on our side, the man of God’s own choosing.
Dost ask who that may be? Christ Jesus, it is he,
Lord Sabaoth his name, from age to age the same,
and he must win the battle.

And though this world, with devils filled, should threaten to undo us,
we will not fear, for God hath willed his truth to triumph through us.
The prince of darkness grim, we tremble not for him;
his rage we can endure, for lo! his doom is sure;
one little word shall fell him.

That Word above all earthly pow’rs, no thanks to them, abideth;
the Spirit and the gifts are ours through him who with us sideth.
Let goods and kindred go, this mortal life also;
the body they may kill: God’s truth abideth still;
his kingdom is forever.

Anonymous said…
Not sure which was first. But I'm pretty sure they were both written around the same time.

Ivy said…
Thanks for your comments, Steve. According to what I read, the Large Catechism came first. Thanks for stopping by. By the way, we had some bishops visiting and one was from the synod that includes L. A.
Wednesday, October 22, 2008

Law+Gospel said…
And for those of us ( i.e. me) who sit here asking where is my retirement account now and what about my daughters' college savings- I remember that the most important things aren't things at all- the kingdom's ours forever.
Wednesday, October 22, 2008

Thanks for the answer (Large C.)

It's good to know these things.

It's nice you had one of our local bishops pay you a visit.

Our bishop hasn't stopped by to see us since I've been a member (over ten years). He and my pastor don't see eye to eye on many subjects. The bishop just prefers to avoid us rather than be reminded of the issues we think are important.(so thinks my pastor - I think he's probably right)

Anywho, keep studying hard and have some fun whenever possible!
Friday, October 24, 2008

Ivy said…
Thanks, Steve, I will. Are you part of the synod that includes L.A.? I found out that my son would be in the Pacifica Synod in Ontario. Peace.
Friday, October 24, 2008

Ivy said…
No, it doesn't include L. A. I asked the bishop because of my son living in Ontario. We ended up at lunch the other day sitting at an empty table and before we knew it, all the bishops and our president were seated with us. The bishops were all very down to earth and we had a great conversation. Peace, Steve.
Saturday, October 25, 2008

Anonymous said…
Glad you had a nice conversation with the bishops.

Our bishop is a very nice man, very down to earth. But his focus may a little too down to earth at the expense of the gospel.
Saturday, October 25, 2008