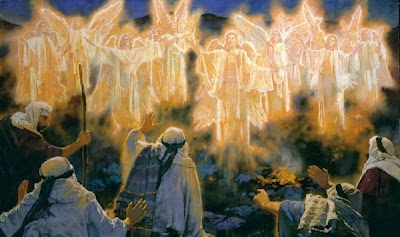 This  is the message I preached last night at our Christmas Eve service. The gospel text is Luke 2:1-20. Have a blessed Christmas and New Year.

Finally, we’re here. Our Advent journey is completed and now we have gotten to the part of the story we love so much—baby Jesus has been born. Now we can answer the question that we’ve been hearing for so long, it’s Christmas!!!!

At the time of Jesus’ birth, society was very class-oriented. There were distinct stratum of society and shepherding was among the lowliest of occupations. Shepherding in Jesus’ time was far different than it is today.  It was a 24 hour a day job outside despite wind and weather.  These shepherds in Luke’s gospel slept outside with their sheep! They couldn’t go into the house, take a break and go back to the sheep when they felt like it. Because of their working and living conditions, they were probably very smelly. After all, these were not well-to-do men who lived in the lap of luxury.

Shepherds were at the bottom of the socio-economic world of their day. That being the case, they had no right, no expectation, and no hope in the world of being touched by the divine.

So, the shepherds were working and it was dark and getting cold. They were occupied with their duties, minding their own business and BAM—an angel appeared to them! Why in the world would an angel come to them? They were nobodies. If God had something to say shouldn’t he appear to the people in charge, who could have some influence in their world? But God did not appear to the Roman political leaders or the religious elite of the temple in Jerusalem. God sent his messenger to ordinary, working class, smelly, dirty, tired, cold shepherds at night.

In the dark of that night, the brightness of this angelic appearance was something they could not ignore. God’s glory shone in that blackness and they were scared to death. In typical heavenly messenger style, the first words out of the angel’s mouth were “Don’t be afraid!” That’s easy for an angel to say!

The angel had good news for the shepherds and for all people, including us.  More than any of the other gospel writers, Luke, presents Jesus as the savior of all people—no matter what their gender, status, origin, wealth or poverty, Pharisees and sinners alike. Luke is the only gospel in which Jesus eats with Pharisees and sinners and tax collectors. This good news of great joy that included lowly shepherds was just the cure for their great fear.

But there is more. The angel had a sign for the shepherds. To find this savior, they’d look in Bethlehem for a baby wrapped in strips of cloth lying in a manger. Now there was nothing unusual about a baby being wrapped in bands of cloth in those days. It would be like swaddling a baby today. That was normal, but this manger business was quite another matter. It was such a distinct and important sign for the shepherds that Luke mentions it three times in this passage.

Now if all this wasn’t enough excitement for one night, a heavenly host or army of angels suddenly shows up declaring God’s glory and the promise of peace. God wanted to make sure the shepherds knew something special was going on, as if at this point of their highly unusual night of work, they could have any doubt. In his usual fashion, God does things outside the box we put him in.

The Jerusalem temple and its sanctuary were considered to be the meeting place between heaven and earth. God’s glory, which was usually associated with the temple, was now being manifested in the fields where sheep graze. The religious and political power brokers had been left out of the loop. God isn’t following the rules by speaking where he is supposed to, when he is supposed to or how he is supposed to. God is appearing to the most unlikely people in the most unsuitable means and places.

If we take seriously the claims of God and allow him to use us, we will find ourselves living counter-cultural lifestyles. We will find ourselves responding differently to situations and people. We may not make the connection as to why we are different, but time spent with God will change us. The shepherds’ encounter with God’s messenger put them on notice that a new world order is coming which is radically different than the former one.

How did the shepherds respond to all of this? They recognized that God had spoken to them, so they hurried off to Bethlehem to check things out. Having found the holy family, the shepherds shared God’s message with them and anyone else that would listen. The hearers were amazed and Mary kept these events in her heart pondering what she had been told. That doesn’t necessarily mean Mary understood all that had happened. She was trying to make sense of it all.

After finding the baby Jesus, What did the shepherds do? They returned to their sheep glorifying and praising God (vv. 18-20). They went back to work, but not to business as usual. The shepherds’ world had been turned upside down and would never be the same again.

The shepherds responded to God’s message. What will we do?

Will we let God’s word change us, go and tell others the message and live lives that are forever different?

Or will we simply hear the Christmas story yet again because it’s what we’ve always done on Christmas Eve?

Will we let this news of great joy amaze us, but go about our lives unchanged?

If God can use shepherds who were nobodies, he can and will use us if we let him.

The promise of Christmas simply is this. God comes down to dwell not with the high and mighty, but with the lowly, unworthy, and unexpected. In this act, God’s makes his love known. God came at Christmas that we might have hope and courage amid the dark and lonely times and places of our lives. We gather so that as God entered time and history through Jesus, God might enter our lives as well (David Lose).

God invites us into his life as he did the shepherds. Our world is being turned upside down. As we leave this church tonight, let our response to the gift of the Christ child be the same as the shepherds’. Go into the village and tell everyone you meet what an incredible thing God has done. Amen.