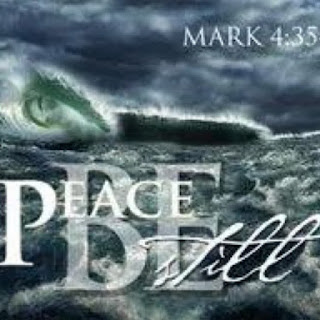 Being on the water can be so much fun, can’t it? However, being in a boat, in a terrible storm, where the boat is taking on water is quite another matter. The boat Jesus and his companions rode in was not very big. It was a fishing boat.

When I lived in Bethlehem, that kind of boat was discovered because of a drought which made the depth of the Galilee very low. The boat was dubbed the “Jesus Boat.”  It was the largest boat type in use on the lake in antiquity. The boat could have been sailed or rowed. It would have had basic crew of 4-5 rowers with a helmsman/captain.

I keep referring to the Galilee as a lake because that’s exactly what it is. It is located in a depression about 700 feet below sea level and is surrounded by hills. Although larger than Chautauqua, on a clear day you are able to see across the lake. And just like Mark writes, violent storms suddenly come up on the Galilee. If you read the e-ministry you saw my reference to a warning about such storms. On a poorly translated sign, it read, “Beware of western whips.” Evidently they were trying to warn the public of western winds or winds that come whipping in from the west.  We never did quite figure that out.

This story from Mark is a drama par excellence. It hinges on four questions, the final one combined with an exclamation.

The first question is voiced by the scared disciples, “Teacher, don’t you care if we drown?” If we paraphrase the disciples’ question, we get something like this, “Why aren’t you as anxious about dying as we are?” This was one mega storm! Here were four professional fisherman and they were scared. Just as the sea monster in ancient times represented the powers of evil, the raging storm too reflects all the powers of chaos and evil. And on top of that, they were headed from a familiar shore out across the water to the unfamiliar, where gentiles lived and that too was scary.

This trip was certainly not the disciples’ idea. Jesus commanded it (v. 35). And Jesus, where was he? He was asleep, resting in the stern of the boat, in the calm of the love of his Father. Jesus’ disciples did not ask him to calm the storm, instead they accused him of not caring. As far as the disciples were concerned, Jesus seemed detached from the situation. We can understand they’re being afraid, but in order to transcend the fear and not be paralyzed by it, they must realize that Jesus is not just any old human, but rather he is the Son of God.

Jesus got up and showed his fearful followers just who has authority over the sea and wind. Mark tells us that the wind stopped and there was “dead [or great ]calm,” which exactly matches the description and counters the “great storm” which began the predicament (vv. 37, 39) in the first place.

We heard this authority reflected in both the reading from Job and today’s psalm. Jesus is not sucked into the panic mode of his followers. He doesn’t address them at all until after he speaks to the raging elements.

This was indeed a mighty miracle, but also an exorcism; for Jesus used the same language to address the wind and sea with which he had addressed demons. The sea was thought to be the abode of forces that were hostile to God which we see in the Psalms and Job. Jesus is portrayed as possessing the power of God over such forces.

The disciples had reproached Jesus and now it’s Jesus’ turn, so he asks them, “Why are you so afraid?” This is a pretty mild translation of the Greek. Jesus’ response more accurately is, “Why are you so cowardly (or fearful or timid)?”

So often we expect and perhaps hope that others will share our panic and distress. Jesus’ sleeping through the storm was more that these desperate disciples could handle.

Then we have a follow up question to the one regarding fear, “Do you still have no faith?” It was not a matter of the first followers not having enough faith—they had none! And how do these hapless disciples respond?

The last verse in today’s gospel reading says the disciples “were filled with great awe,” (v. 41), however literally, it means “They feared a great fear.” This was their response to their Master’s questions. They had a mega-fear.

Now the disciples talk, not to Jesus, but among themselves. They ask, “Who is this that even the wind and sea obey him!”

The poetic imagery of God triumphing over the raging waters clarifies the response to this last question. And the answer is…God, Jesus.As readers, we know that Jesus is the Son of God, but the disciples could not grasp the significance of Jesus’ identity, which is interesting. They had already seen Jesus heal people and cast out demons.

The storm was frightening and the disciples found themselves in the presence of the One with power greater than the storm. Who is this? The disciples were focused on externals—first the storm at sea and then what they’d seen Jesus do. In both instances, it was fear that was produced. Instead of the “great storm” that became a “great calm” becoming a sign of “great faith” for the disciples, it becomes a source of “great [mega] fear” (Agost)

Even if the first disciples didn’t know who this was who had calmed the sea, the church Mark wrote to surely knew. They knew and we know, but in the storm, sometimes it’s easy to forget.

There is an alternative to risking the dangerous, stormy crossing. That is to stay tied up on the shore. That is the picture of many churches—a peaceful, restful club house on the shore rather than a boat following Jesus’ command to take the fearful risk of crossing the lake. Sometimes we are more willing to be safe than to answer Jesus’ call to go to the other side.

However, if we stay tied up to the dock on the safe side, how can we show others that we care for them? We may be able to speak an authoritative word to bring stability to chaos. This is something Christians of all stripes have done this past week, resulting in at least some migrant children being reunited with their families. God’s church spoke with one voice.

It is easy to be distracted, discouraged and frightened by externals. We may wonder if God has abandoned us. However, even in such circumstances, God still works. Life is just much easier and happier if we are not overcome and paralyzed by fear. In spite of the disciples’ lack of faith, the miracle still happens for them. Jesus did not give up on them and doesn’t give up on us. We can allow Jesus to speak peace to our hearts.

Those of you who sail know how disastrous it is to have the wind die down. That means that it will take manual labor to move the boat to where you want it to go. Even the presence of Christ and his great miracles may still mean a lot of hard work on our part to get to where Christ wants us to go. Jesus didn’t just beam his disciples over to the other side where he wanted them and he doesn’t do that with us either. As many miracles as God may perform in answer to prayer in our world and in our neighborhoods, such miracles probably won’t let us off the hook from doing the hard work required to do what Jesus has called us to do.

God’s real work is in the midst of real problems—wars, crime, drugs, natural catastrophes, migrant disasters—for the well-being of the community, for the benefit of struggling humankind. God empowers people to do God’s work, intervening in crises and altering the course of events in our world.

Where is God encountering us and calling us to the other side of the lake—to change, to a new and different imagination about what it means to be a people of faith in our particular community and circumstances?

“Who then is this, that even the wind and sea obey him?” Who is he to you and me?