This is the message I preached to the people of St. Timothy Lutheran Church. The gospel was Mark 6:14-29. 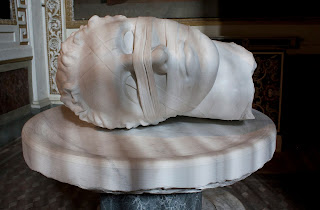 Right before today’s gospel lesson, Jesus’ disciples were sent out to preach, teach and heal. Following today’s gospel, they return telling Jesus of their exploits. What’s in the middle?—a seemingly out of place, gruesome story of Herod’s flashback to the beheading of John the Baptist. This is another Markan sandwich, with a rather unpleasant filling.

Jesus had become known, which we would think is a good thing, however, there are consequences to this. Once the disciples started preaching, knowledge of Jesus increased. Jesus’ followers were not doing works in their own strength or authority, but by the authority given to them by Jesus (v. 7). However, there is fallout from the disciples’ successful campaign.

A question of Jesus’ identity came up. Herod was spooked and thought Jesus was John raised from the dead, which is odd since they were contemporaries. This was a popular view among the people and obviously Herod’s view. Additionally, his own guilt and fear certainly affected his perspective of Jesus’ identity and power (6:20, 26).

This story of John is so important because of the inextricable link between Jesus’ and John’s ministries and lives. John’s ministry per Mark was “the beginning of the good news of Jesus Christ (1:1). This gruesome story also calls attention to the cost of faithfulness.

This story epitomizes good vs. evil and contrasts. What are the differences between the so-called “kingship” of Herod and the kingship of Jesus? Mark is showing the reign of God Jesus proclaims and exemplifies alongside life in the world without God’s reign and rule.

First off, Herod was not actually a king or ruler over the whole land. He was a tetrarch over Galilee, in the north, a subordinate ruler of only one of four divisions in the country. Perhaps he thought of himself as a king, but that would be delusional. Herod had little true power.

And Jesus?…He is the king of heaven and earth, who by virtue of his death and resurrection, was raised in power. God exalted Jesus and gave him a name above all names, at which every knee will bow and tongue confess his kingship (Philippians 2:9-11).

Herod was cruel. He was notorious for his contempt of the religious practices of pious Jews. He even built his capital city, Tiberias, on an ancient burial ground, making the city ritually unclean to religiously observant Jews (see Num. 19:14–22). Many Jews shunned the place and Herod filled his capital with Gentiles and elite, nonreligious Jews.

Our Lord Jesus had compassion for others, on the margins of society. As Jesus “…went ashore, he saw a great crowd; and he had compassion on them, because they were like sheep without a shepherd; and he began to teach them many things” (Mark 6:34). His compassion extended to concern for the physical hunger of the crowd when he fed the 5,000 (Mark 8).

For his birthday, Herod threw a big feast, inviting the courtiers, officers, and leaders of Galilee. These guests had power and status! Herod feasted on power but was never truly satisfied.

What kind of feast did Jesus throw? His guests were the poor, nameless masses. Jesus fed people bread and fish and they were satisfied. They ate their fill, leaving 12 baskets of leftovers.

The kingdom of the Herods was beginning to fade. It was marked by pride, jealousy, cruelty, and death, while God’s kingdom, ruled by Jesus and his disciples, was marked by courageous faithfulness—even to death—as well as life and nourishing fellowship (Bryant).

Herod is forced to choose between the innocent and the politically expedient. In the preaching of John the Baptist, grace presented itself to Herod, waiting to be accepted or rejected. Herod caved into his oaths, to his daughter and guests, weakly doing what he didn’t really want to, exchanging grace for death. However, the thread of grace continues throughout Mark’s gospel and all of scripture. Christ ultimately will redeem violence and suffering.

As Herod struggled with the choice he had to make, it deeply grieved him. This is the same word used of Jesus when he prayed in the Garden, “I am deeply grieved” (Mark 14:34). See how quickly Herod went from pleasure to grief. This is a reminder about a world in which pleasure becomes our main objective. Its thrills are fleeting.

Herod sent a soldier of the guard to order the execution of John the Baptist. Jesus however, sends his disciples to feed people.

Herod orders the beheading of John. This presents a juxtaposition between the second reading from Ephesians and the gospel. Jesus brings all things together, heads up all things, whereas all Herod can do is decapitate.

For his faithfulness, John the Baptist is beheaded. How sobering this news must have been for Jesus’ disciples. If John was executed, what might Jesus’ future be—and what about their own? Mark is foreshadowing Jesus’ death on the cross and warning his readers and those that follow that their fervent preaching could lead to martyrdom.

Is our world so different from that of Jesus’ time? Just as Herod struggled with what to do about John the Baptist, there are lives at risk as today’s rulers decide what actions to take. Bad faith actions devastate the most vulnerable. Infants die as promises to cut healthcare expenses result in the closure of public health centers, with no alternative means developed. Many working families struggle to make ends meet as the national debt erodes the value of the dollar and increases prices. Military alliances may draw soldiers into conflicts which place young people at risk because of the promises of their elders. Conversely, people around the world may die because of nationalistic “ethnic cleansing” if the militaries of other countries do not intervene (Yust). Media brings us images of needless deaths, the slaughter of innocents. Likewise, our congregations are filled with people who are dealing with their own terrors: deaths of loved ones, broken relationships, abuse, and addiction.

The climate of today’s culture mirrors and is a microcosm of today’s gospel. Our challenge today is to consider our own decisions and ask ourselves whether our choices are self-protective, or part of God’s transformation of the world.

Bearing God’s word is risky business. Speaking truth to power can cost us our lives as it did, John the Baptist, Jesus and so many throughout the history of the church. Those who acted as prophets by speaking truth were ordinary people called to deliver an extraordinary message. Even today we enter into the great struggle of truth vs. power, or at least perceived power. It is a confrontation of political power and prophetic faith. The real power holder, our Lord Jesus Christ, will make all things new. Jesus’ resurrection and return as king will be God’s vindication of both John and Jesus.

Will we follow the kings of our world or King Jesus? We may never be called to physically give up our lives, however, Jesus does call us to die to self-interests, popularity or pleasure for its own sake, so we can faithfully follow Christ. Speaking truth to power may involve speaking up in a public way for those who cannot speak for themselves, calling members of Congress, writing to political leaders, or it could mean much more.

Today, God invites us to a feast, not like Herod’s death feast, but to the feast of King Jesus, bringing life and nourishment. When we leave this place of worship, God sends us to proclaim God’s in-breaking reign to all the powers that profess to rule this world. Let’s give them notice!