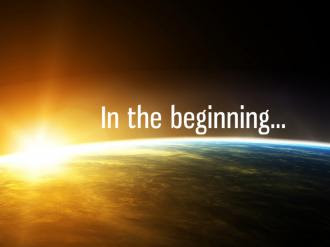 Today we are engaging the Prologue of John’s gospel, which reads like the poetry of a song, and so it likely is. Many scholars believe it is one which was sung in the churches of John’s time. Music helps us remember and it was and is a great way to learn scripture and theology. Like an overture to an opera or oratorio, John’s writing strikes the major themes that will occupy the entire gospel of John. In this song we see The Word at Creation, The Word in History and The Word Incarnate. Let us hear God’s love song.

First of all, we have The Word at Creation. The writers of the creation story in Genesis took Israel back to the time before anything was created, to the moment before God spoke creation into existence. John does the same thing with his readers of the gospel.

“‘In the beginning,’ there was God and the Word, and the rest of the story unfolds from that relationship.” Repeatedly in Genesis, we see God speaking creation and its various elements into being. “Word,” itself is not specifically used in Genesis, but God’s Word of John’s gospel was there creating. God created through speech, not only in the creation account but through the Law at Mt. Sinai as well as through the prophets. In Proverbs, God’s word is Wisdom, God’s companion “before the beginning of the earth,” working alongside God to accomplish God’s plan (O’Day).

John keeps using the expression “Word” for our Lord Jesus. It is the Greek word logos, a term that was familiar to both Jews and Gentiles. However, John has used it in a new context with fresh meanings. For John, logos is the lens through which he views the coming of Jesus into the world. He takes all the meanings the Gentile world may have applied to logos and subsumed them into the revelation of God in Christ, as John plainly states, “In the beginning was the Word, and the Word was with God, and the Word was God,” v. 1. Here we have the origin of the Word, his relationship with God and his identity as God. This is the universal revelatory Word of God that is present and gives life to the whole creation.

God is the Word, and the Word is with God; one nature of divine essence, and yet not one person only. Each person is God complete and entire, in the beginning and eternally. These are the passages upon which our faith is founded and to which we must hold fast. For it is entirely above reason that there should be three persons and each one perfect and true God, and yet not three Gods but one God… (Luther, sermon from 1521)

By John’s time, Christians would refer to the message of the gospel as the “Word.” “The Word of God that addresses us in Christian preaching is the same Word encountered in creation, in the prophetic word of the Old Testament, and definitively in Jesus Christ” (Boring and Craddock).

In Christ, the logos, God created light and life. “In him [the logos of God] was life, and the life was the light of all people,” v. 4. Yes, both were originally created in Genesis, but this is a whole new level of each. It is beyond the mere physical but is the in-breaking of God’s presence in a whole new way.

This light shines on all. In creation, God is known by all people. John teaches though that whoever knows God, no matter who they are, knows this God, in whatever way they may describe God.

Next, we come to The Word in History. In addition to creation, John presents Jesus as the source of revelation and grace for humankind as “the true light which enlightens everyone,” v. 9.) Just as it is today, the world was a dark place. People could either embrace the light of God’s gift or reject it. Unfortunately, Jesus’ own, according to John, rejected him. They preferred the known darkness to the unknown of what life would be like walking in the light.

Creation and incarnation come and evoke responses from the world. We can believe God’s word about God’s intimate involvement in the creation and the eternal origins of Jesus or not. Whether or not we believe makes it no less true. Those who welcomed God’s Word and Light became God’s children. They were born of God, not by their own actions or behavior.

The last part of this passage from John concernsThe Word Incarnate. Now things get scandalous. It was one thing to talk about the Word as John did earlier in his gospel. Any ancient reader understood what had been said in his or her own terms. But now, something has happened. “The Word is the transcendent, the Eternal One, the Creative Word there at the beginning, the Reason that permeates the universe and gives it meaning. The Word is identified with God” (Boring and Craddock). God has been enfleshed! “Flesh is true humanity, humanity in contrast to God. The one true God is manifest in the truly human Jesus of Nazareth.

God is still in the business of creating. We have become children of God and have been “born...from God,” v. 13. It is the power of the incarnation that makes us God’s children. We have received this through faith, by “believing in his name,” v. 12.

God wants to continue creating in our lives. Just as we expect our children to grow to adulthood, as God works within us, we grow to spiritual adulthood. All we have to do is let our creating God work. This happens as we pray, read scripture, develop our relationship with God and be who God has called us to be.

God speaks out to us to be creative conduits of his love to all. We don’t do this to gain brownie points with God, but this naturally follows from our relationship with God.

Martin Luther wrote, “Faith cannot help doing good works constantly. It doesn’t stop to ask if good works ought to be done, but before anyone asks, it already has done them and continues to do them without ceasing.” Our desires and activities to help the poor, the orphans, those affected by natural disasters, by war and strife, the hungry etc., all emanate from the compassion of Christ that God creates within us.

God calls us to go and do because of his creation and recreation within us. We are to be the song that sings life into the world’s noise, chaos and voices of death.

To God be all the glory.