Skip to main content
August 03, 2018
These are some thoughts on this coming Sunday's readings. This month we are celebrating the Season of Creation. 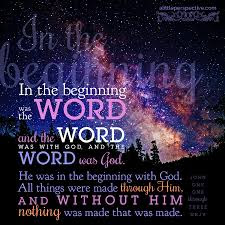 10 He was in the world, and the world came into being through him; yet the world did not know him. 11 He came to what was his own, and his own people did not accept him. 12 But to all who received him, who believed in his name, he gave power to become children of God, 13 who were born, not of blood or of the will of the flesh or of the will of man, but of God.

14 And the Word became flesh and lived among us, and we have seen his glory, the glory as of a father’s only son, full of grace and truth.

This is the first Sunday of our celebration of God the Creator and our focus is on earth. If we look at the first lesson from Genesis of the creation, it begins, “In the beginning…God…” We have a parallel approach in the gospel of John. “In the beginning was the Word…” It’s interesting how similar, though written thousands of years apart and in different languages, the first verse of each of these books is. It’s kind of like Yogi Berra’s statement, “It’s deja vu all over again.”

This passage is loaded with wonderful images about the Word, Christ Jesus, who was in the beginning with God the Father and co-created all the wonderful, beautiful things around us.

Not only did the Word create, but the Lord Jesus longs to recreate us, making us new in baptism by the washing of water and the Word. As Luther wrote concerning baptism:

Certainly not just water, but the word of God in and with the water does these things, along with the faith which trusts this word of God in the water. For without God’s word the water is plain water and no Baptism. But with the word of God it is a Baptism, that is, a life-giving water, rich in grace, and a washing of the new birth in the Holy Spirit, as St. Paul says in Titus, chapter three: “He saved us through the washing of rebirth and renewal by the Holy Spirit, whom He poured out on us generously through Jesus Christ our Savior, so that, having been justified by His grace, we might become heirs having the hope of eternal life.This is a trustworthy saying.” (Titus 3:5–8) (The Small Catechism)

Again it is all about the Word of God with the water in baptism. God’s Word created the heavens and the earth and creates within our hearts and lives that which God wants us to be. We just have to be who God created us to be.