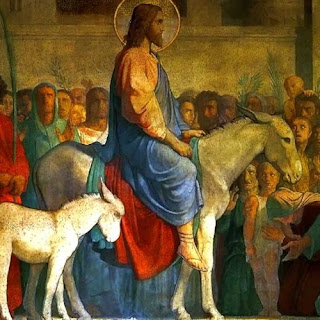 I shared these words  with the people of St. Timothy Lutheran Church last Sunday, 4/14/19.


This is my response to today’s Palm Sunday readings. I was moved by these words and they eloquently echoed my own thoughts. Here are excerpts from a Palm Sunday sermon by Frederick Buechner entitled “The Things That Make For Peace” from A Room Called Remember:
We call it Palm Sunday because maybe they were palm branches that were thrown into the road in front of him as he approached the city-a kind of poor man's red-carpet treatment, a kind of homemade ticker-tape parade. Just branches is all the record states, but maybe palms is what they actually were, and in any case it's as palms that we remember them; and all over Christendom people leave church with palm leaves of their own to remember him by on the anniversary of his last journey, to pin up on the kitchen bulletin board or stick into the frame of the dresser mirror until finally they turn yellow and brittle with age and we throw them out. Some of the people who were there were so carried away by what was happening that they took the clothes off their backs and spread them out on the road in front of him along with the branches, so that the clip-clop, clip-clop of the hooves of the colt he was riding was muffled by shirts, shawls, cloaks spread out there in the dust as maybe even you and I would have spread ours out too if we'd been there because it was a moment with such hope and passion in it. That's what the palms are all about.
----
"Blessed be the King who comes in the name of the Lord," the cry goes up. There is dust in the air with the sun turning it gold. Around a bend in the road, there suddenly is Jerusalem. He draws back on the reins. Crying disfigures his face. "Would that even today you knew the things that make for peace." Even today, he says, because there are so few days left. Then the terror of his vision as he looks at the city that is all cities and sees not one stone left standing on another - you and your children within you - your children. "Because you did not know the time of your visitation," he says. Because we don't know who it is who comes to visit us. Because we do not know what he comes to give. The things that make for peace, that is what he comes to give. We do not know these things, he says, and God knows he's right. The absence of peace within our own skins no less than within our nations testifies to that. But we know their names at least. We all of us know in our hearts the holy names of the things that make for peace - real peace - only for once let us honor them by not naming them. Let us name instead only him who is himself the Prince of Peace.
"He shall judge between the nations and shall decide for many peoples; and they shall beat their swords into plowshares and their spears into pruning hooks; nation shall not lift up sword against nation, neither shall they learn war any more." That is our Palm Sunday hope, and it is our only hope. That is what the palms and the shouting are all about. That is what all our singing and worshiping and preaching and praying are all about if they are about anything that matters. The hope that finally by the grace of God the impossible will happen. The hope that Pilate will take him by one hand and Caiaphas by the other, and the Roman soldiers will throw down their spears and the Sanhedrin will bow their heads. The hope that by the power of the Holy Spirit, by the love of Christ, who is Lord of the impossible, the leaders of the enemy nations will draw back, while there is still time for drawing back, from a vision too terrible to name. The hope that you and I also, each in our own puny but crucial way, will work and witness and pray for the things that make for peace, true peace, both in our own lives and in the life of this land.
Despair and hope. They travel the road to Jerusalem together, as together they travel every road we take - despair at what in our madness we are bringing down on our own heads and hope in him who travels the road with us and for us and who is the only one of us all who is not mad. Hope in the King who approaches every human he art like a city. And it is a very great hope as hopes go and well worth all our singing and dancing and sad little palms because not even death can prevail against this King and not even the end of the world, when end it does, will be the end of him and of the mystery and majesty of his love. Blessed be he.
Picture