When I lived in Rochester, I had a part-time job at Harris Interactive, which had a call center. It was from there that we conducted the Harris Poll and other surveys. I liked the people I worked with and enjoyed working there far more than at my full-time job.

One of my co-workers, Jerry, always had a joke or something funny to say. One of his sayings reflected the way we often feel, “Change is bad!” Change is not easy, even when the change is one which we have been looking forward to.

The liturgical season of Easter begins and ends with the change of absence: in the beginning, there is the absence of Jesus’ body from the tomb. At the end, we mark the absence of Jesus’ body from the earth after his ascension. These are two bookends to the Easter season. It is not a matter of a missing object, but rather the kind of absence, that missing element that causes us to revisit and redefine everything we thought we knew.

This week’s second lesson from Revelation brings to our attention a series of absences in the New Jerusalem that cause us to re-evaluate the way we live in the here and now.

What it all amounts to is that “the first things have passed away.” Especially in this Sunday’s reading from Revelation, the absences really pile up. There is a whole host of things that will not exist in the new creation. In fact, it’s rather jaw-dropping. Listen to this. There will be:

A theme begins to emerge showing us that in the new creation, many things that defined the old creation by their presence, prevalence or inevitability will be gone from the new creation. As in chapter 21, when the loud voice from the Throne announces at the beginning of John’s vision of the holy city, “the first things have passed away” (21:4).

We don’t like giving up the known, even if we don’t like it, it’s what we know. It’s like the saying, “The devil you know is better than the devil you don’t know.” We are used to the sun and moon, daytime and nighttime. These are things we’ve known all of our lives. But God has change in mind for the earth and for us.

These images in Revelation are symbolic and theological. They describe God’s intentions for renewing and restoring the world so that God’s will may be done on earth as it is in heaven. Thinking of these absences as  theological realities causes us to think of the way anti-God forces lay claim to our lives now and how such claims will be completely obliterated in the new creation. The power of these images is to invite us to a re-evaluation and renunciation of the holds these forces have on us as Jesus’ followers today. We may live in a world of the “first things,” but we live in it according to the logic of the new creation.

Can we look at absence as longing and living for the new creation? Thinking through the absences in this passage of Revelation can be a way to get us to imagine what faithfulness to the way of the Lamb might look like.

We live in a world of tension, violence and animosity. Even places of worship have become sites of mass shootings driven by hatred and bigotry. It has become so common that once the shock has worn off, most people shrug and move on.

Why would the New Jerusalem have no temple, no special place to worship? It shows a reality where every place is a place of worship—worship that is uninterrupted by violence and hatred. Kings of nations come, not to conquer, but to share their glory. Seeing the vision of future without fear of violence means that we can remain faithful in prayer, standing against the threat of violence with bold witness to the Lamb’s way of peace.

In ancient times, cities were surrounded by walls with gates in them for people to come and go. The Old City of Jerusalem has eight gates. Here is a picture of the Jaffa Gate (on the left). 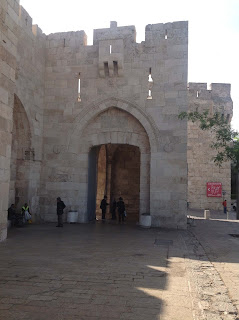 Can you imagine what it would be like to close all the doors to all the gates in case of an emergency? You can get an idea of the size of the walls. These walls do not go back as far as the writing of Revelation. They were built in the early 16th century by Turkish sultan Suleiman the Magnificent. 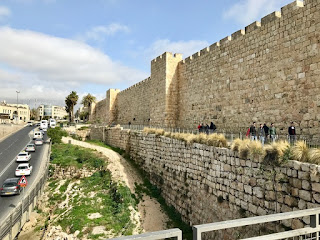 Here are some other kinds of walls too. There is a separation wall in Bethlehem that separates Palestinians from their farmland and prevents them from easily traveling elsewhere. 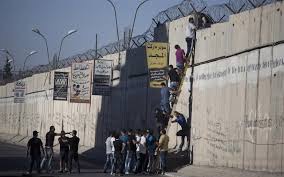 There is also the fence-like barrier at our southern border with Mexico. 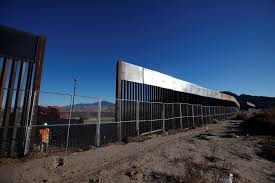 What I find particularly interesting in the heavenly city is the absence of closed gates. It makes me wonder about the prevalence and purpose of walls and gates today. As we are taught throughout scripture, the church can be a community that welcomes the foreigner and extends neighborly kindness to all. God is the security of the people of the New Jerusalem.


Another absence is that of work needed to produce the lush growth of the tree of life on either side of the river running through the heavenly city (22:2). What abundance is produced! They produce twelve kinds of fruit, producing fruit each month! In the new creation, the crops seemingly grow by themselves. That would sure make life easier for all the gardeners and farmers, would’t it? God is the provider of food for God’s people.

The leaves of that tree bring healing for the nations. There is no sickness in the New Jerusalem and all the clashes of warring tribes and nations are resolved and healed. The inhabitants, the new humanity, the universal population exists in undifferentiated fullness.

But perhaps, one of the most wonderful absences in the new creation, is that of falsehood. Can you imagine a community together in truth? Perhaps this can encourage us to refuse the practice of falsehood in the present. God is the God of truth.

Imagine a radical kingdom of God loyalty where we as the church were willing to say, “if the new creation doesn’t have it, we don’t need it.”

God becomes our all in all, our everything. No matter what appears to be lacking and absent in the New Jerusalem is that way because God supplies whatever is needed. So…God is our light, security, provider, our life---our everything! These things are not needed in the new creation because it is all in God.

Whatever may be absent in the new creation, the main thing is to notice the presence of God and the Lamb at the center of renewed reality. A church that centers on Jesus will stand out in our time marked by violence, exclusion and falsehood. That’s exactly the point of John’s Revelation—to create a community capable of bearing witness to the Lamb and his way. By doing so, we offer a foretaste of the “new things” of new creation, that is needed so much in this world of “first things.”

We have an opportunity on Saturday to meet with the Muslim community for their last community meal as they break their daily fast of Ramadan. We can tangibly extend God’s love to one another as we eat and visit together. Our faith communities have both been hit hard by violence at home and elsewhere.

The big idea is that we not keep our faith to ourselves, behind the doors and within the walls of our building. Many of us already do a lot outside of church to show Christ’s love. It’s a matter of choosing every day to demonstrate concretely and visibly our love for Christ, for each other and for our communities. As we do, we choose to live in the grace of the city of God, the place that embodies the fullness of God’s hope for the world and for lives grounded in love.

Let us pray. Lord, help us to see and follow the Lamb wherever he may lead us. Amen.