The book of Revelation is one that is easy to shy away from. We get side-tracked with beasts and horsemen on different color horses, an apocalyptic end of the world as we know it and on bad theology we pick up in movies and books. The thing is, the title of the book is not the Revelation of JOHN, but rather as its first few words say, “the revelation of Jesus Christ.” This book is all about Jesus, so rather than avoiding it, say a pray before reading and embrace it. 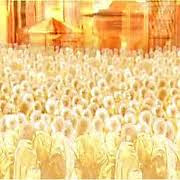 John wrote this book much later than other New Testament books were written. It was a time of great persecution for Christians under the Roman emperor Domitian. Many were martyred; thereby being added to the heavenly court. Revelation is a book of symbols, filled with hope to encourage these beleaguered Christians.

Who are these gathered for worship in Revelation? They are an assortment of people from every nation, all tribes and peoples and languages who have come through the “great ordeal.” Witness on behalf of Christ brought them into direct conflict with the powers of their world—the dominate Roman Empire. They were martyred for their faith and witness. The New Testament word for witness is marteria, from which we get the English word “martyr.”

In this crowd we find amazing diversity; and yet this diversity leads to amazing unity. All of them were robed in white. This signifies victory and purity. Pastors wear albs to remind us of this, taking us back to the cleansing of baptism.

All stand with palm branches of victory in their hands. Do you remember around a month ago we were holding palm branches as we sang together “All glory, laud and honor to you redeemer king.” As much religious symbolism does, palms have a double meaning. Christ was lauded on the way to his cross with palms and is also honored with palms as the lamb on the throne of heaven. Although the church is embattled by a hostile culture, it already celebrates the victory of God.

All cry out together to God, “Salvation belongs to our God…and to the Lamb” (v. 10). The word translated “salvation,” is better translated “victory.” It is not a descriptive statement, but an acclamation of praise. It is the language of confession and worship.
Here in John’s writing we find the revealing of Christ as Lamb and shepherd who comforts and protects his people. The blessings for his people are comprehensive. Physical needs are no longer a concern. God’s people are sheltered. Can you imagine if we did not have to be concerned about shelter today? My goodness, isn’t that where the vast majority of our income goes? Physical needs are of no concern to this multitude.

Not only does our Lord shelter his people, but he makes sure they no longer hunger or thirst! Christ guides the thirsty to the healing waters of life, which we have already experienced in baptism. The food that nourishes us, satisfying our deepest hunger is the eucharist. Nor will these saints be overcome by heat. As a tender shepherd cares for the sheep, so our Lord cares for his beloved children.

In this life we experience all kinds of personal pain, especially as we age. Loved ones die, our bodies ache. Getting old is not for the faint of heart, as the saying goes. And yet, pain is not relegated to only the aged. Just this week, around 20 years after the Columbine shooting and loss of life, Colorado experienced another school shooting at the STEM School, Highlands Ranch. I cannot imagine what it must be like going back to school after an experience like that or being a parent whose child does not return home.

My son, Christian, was a senior in high school when the shooting at Columbine occurred. Although we were far from Colorado, in a quiet suburb of Rochester, he experienced fear going back to school in the aftermath of Columbine. There are several so-called survivors of other shootings who eventually took their own lives. Pain is part and parcel of this life. And yet, in this heavenly scene in Revelation and in our lives in God, personal pain will cease to exist, v. 17.

We live in a very divided world and nation. Some believe that the way to curb gun violence in our schools is to arm teachers. Others feel this will only worsen the problem. I have my own feelings about this issue, but I certainly don’t have all the answers. This is but one issue over which we are divided as a nation. However, I have to admit that I was impressed with the prime minister of New Zealand in the wake of the mosque shooting there. She put her foot down that automatic weapons would no longer be available. Period.

It seems like nothing will ever be able to bring the various sides together on any issue. And yet, here, in Revelation, we see a future, an apocalyptic scene of God being with us through the hard times; holding us, protecting us, caring for us because we belong to God. All boundaries and lines and divisions that separate people from one another are torn down, so contrary to the way of the world which likes to reinforce difference and divisions between people.

If God can make one people out of such a vast array and variety of peoples as we see in Revelation, don’t you think God can do something about all the dysfunction and mean-spiritedness of our public life today? All are included in God’s vision for humanity. God’s kingdom is so designed so that nothing will be left that can possibly divide us. Through our life together as God’s church, can we model the life of love in Christ as we too join the great multitude in John’s vision, recognizing our shepherd as “the Lamb at the center of the throne” (v. 17) who guides us to springs of living water, where God will “wipe away every tear” from our eyes (Carey)? The suffering of God’s martyrs prepared them for worship and for victory, but it was victory by God’s definition, not the world’s, meaning physical death for them.

Why does it matter that God comforts the hurting, heals the sick, feeds the hungry? It matters because there is a hurting world out there that needs the care of a good shepherd, that needs our care. We can listen to the children in our lives. We can ask people if they think about taking their lives. We can refer people to agencies that can help them, such as the Mental Health Association. Basically, we need to be there. We need to be Christ to those in need.

Witnesses tell the story of what they have seen. God calls us to be witnesses of God’s character of love and faithfulness. God calls us to share that good news with all, no matter the personal cost.

What kind of an amazing faith and salvation is this that makes people willing to lay down their lives? It is grounded in faith’s ability to resist evil and endure its counterattack. This is possible only in Christ, made real only by faith in the promises of God. The only weapon we have been given in this war is the word of God. This may not seem like much of a weapon from the world’s perspective. The Apostle Paul however, said that it “is the power of God for salvation (Rom. 1:16).

God has not called us to an easy calling and yet it is the God of the universe, who sacrificed himself on the cross for us, becoming the slain lamb and shepherd who empowers us to do what we are called to do. The Holy Spirit works in and through us. As we see in Revelation, those who publicly witness to the power of the gospel, confronting evil wherever it is found, inevitably encounter tribulation rather than escape it. Instead, God goes with us through it.

It is Easter! Death does not have the last word. There will be a day when hunger and thirst will be eliminated. And there before the Lamb of God, we see the worshiping mass of the church triumphant—filled with joy and thanksgiving far greater than any suffering in this life. They all fall down before God singing, “Thanksgiving and honor and power and might be to our God forever and ever! Amen” (v. 12).