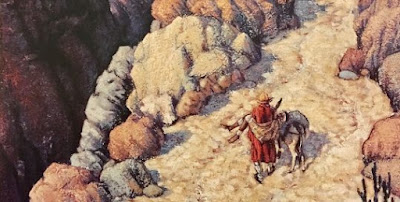 Are any of Jesus’ parables more familiar than this one we entitle the Good Samaritan? We think we know it so well. It is hard to see it with new eyes, to go beyond our preconceived notions that we bring with us to this text. But that’s just what we are going to try to do. And I’m going to need your help too.

First of all, it’s easy for us to miss the shocking nature of this parable if we start to think that this story is only to teach us to imitate the Samaritan. Parables were intended to be shocking. This parable says so much more to us about God, our relationship to God and the lengths to which God will go to reach out to us.

Who is this lawyer who approaches Jesus? Is he like those we hear of on tv and radio ads? No, he isn’t that kind of lawyer. He is an expert in the Torah, in the Old Testament law of God. In other words, he really knows his stuff.

Luke writes that the lawyer wanted “to test Jesus.” However, the mood of the scene is not particularly combative. Jesus likes the lawyer’s answer to his first question, telling him, “Do this, and you will live,” (v. 28). Jesus adds this to the conversation so that the lawyer would realize this wasn’t strictly an academic exercise since it was not unusual for Jewish leaders to converse in this way.

The second question asked by the lawyer, “who is my neighbor?” (v. 29), is completely legitimate. This is so especially since the original command to love one’s neighbor, in the Hebrew Scriptures, specified “your kin” and “any of your people,” (Lev. 19:17-18).

Now we get to Jesus’ parable. Jericho is an oasis in the Judean wilderness. It is 17 miles northeast of Jerusalem and down below sea level. The descent from Jerusalem to Jericho has been considered dangerous throughout history. The crusaders even built a small fort at the halfway point to protect pilgrims.

And who are the characters in the parable? The priest and Levite are Jewish religious leaders. Both serve in the temple but have different roles. The priest finds himself facing a dilemma when he sees the beaten man. How could he know if the victim was a neighbor? Because he had no clothes, the priest couldn’t determine his ethnicity. The victim couldn’t speak, so the priest could not identify him by his accent. The man might even have been a non-Jew!

What of the Levite? He too decided against helping the half-dead man. His issue may have been the fear of being robbed. He could help the man, but to stay near him meant risk from robbers. After all, what if this beaten man lying there was just a ploy to rob him.

The main character, the hero is a Samaritan. He too would be a target for robbers, who might have respected the priest and Levite, but not a Samaritan. How could the Samaritan be a hero? Samaritans were a despised people. A Samaritan village had just denied welcome to Jesus and his followers. Samaritans were half-breeds who had refused to take part in the restoration of Jerusalem and had sided with the Syrian leaders in their wars with the Jews. The Samaritan temple had been destroyed by a Jewish high priest. Jews publicly cursed Samaritans in the synagogue and prayed daily that the Samaritans might not partake of eternal life. Why did Jesus choose a Samaritan as the third character coming along the road to Jericho? Samaritans were the ultimate outsiders. This was a stunning reversal Jesus introduced in the parable. There was animosity on both sides. Some Samaritans had defiled the Temple in Jerusalem by scattering human bones in the Temple court. There was no love lost between the Jews and the Samaritans.

The Samaritan acted very bravely, not only by stopping along the desert road but by taking further steps. If the wounded man regained consciousness, he could possibly insult the Samaritan since oil and wine were forbidden objects if the source was a Samaritan. Despite the dangers and risks, the Samaritan takes the man to the inn, stays with him overnight and cares for him. The Samaritan pays for everything out of his own pocket, leaving the victim provided for, as well as promising to return to pay any outstanding balance. He provides for the man’s recovery and enables him to leave town and return home.

Who is my neighbor gets asked a second time, this time by Jesus and with a twist. As Jesus often does, he has flipped this parable on its head. The lawyer’s question was “Who is my neighbor?” If Jesus had answered that, then it would be a matter of illustrating that the man robbed and beaten would be the neighbor that was to be helped. But what does Jesus say after the parable? “Which of these three…was a neighbor to the man who fell into the hands of the robbers?” (v. 36). So, who is being the neighbor? The Samaritan. But did you notice that the lawyer just couldn’t bring himself to even say “Samaritan.” Rather, he said, “The one who showed him mercy,” (v. 37).

This is a story that offers an example of acting in love which is without preference or partiality and expects nothing in return. After all, the Samaritan delayed his own journey, expended great energy, as well as risking danger to himself. He spent two days’ wages and promised the innkeeper more if needed. All this was done by one who was a social outcast and religiously a heretic by Jewish standards.

How would Jesus’ disciples react? Having been sent out among the 70, they would identify with the traveler in the parable who was attacked, beaten and stripped. Having just experienced the animosity of the Samaritans, they would be astounded at Jesus’ teaching.

Who are we in this parable? We would all like to identify with the Samaritan, whom we call good. After all, we always speak of good Samaritans who do selfless things to help others. Yes, it would be good to be identified with him. And yet, Samaritans were looked down upon by the Jewish people.

No listener to Jesus’ parable and no character from it would have wanted to be the Samaritan in the story. Ok, so what about the priest or Levite? Those are good, religious types. But when a need is presented to them, they ignore it and for no good reason. No, I don’t think we would want to be either of them. That leaves us with just one more character who had traveled the road; the man left for dead along the roadside.

If we identify with the man left for dead, as the parable intends, then who would be the person that would make us feel like we would rather die then get help from that one?

Here are some possibilities: The homeless, one who is dirty and unwashed, a drug addict, a Muslim, someone from another denomination or non-denominational church.

So, what can we do to change? We can start where we are. We can help out even when we don’t have to. We can stop keeping score of our losses. Instead, we can keep a score of reasons to be grateful. We can share with those who haven’t had the breaks and benefits in this life that we have had.

In Luther’s time, this parable was understood in this way: We were the desperate sinner lying half-dead at the roadside. Jesus was the Samaritan who rescues us, heals us and takes us to the inn, which represents the church. There we recuperate. Christ, the Good Samaritan embraces us with the tender compassion of God.

Let us pray.
O God, your mercy overwhelms us. We don’t deserve your noticing of us, your coming near or your rescuing of us from sin, death and the power of the devil. Enable us to let you work in and through us for the sake of all in need. In Jesus’ name we pray. Amen.