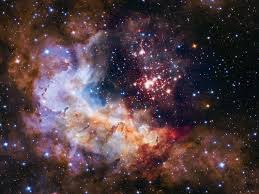 Today we celebrate universe Sunday. The image of the Cosmic Christ stresses that Christ’s lordship is an eternal presence through time and space, encompassing all of Creation in the ultimate fulfillment and consummation of God’s will for the cosmos.

Imagine the world of the Colossians. They were part of the Roman Empire. Images of Caesar abound. The imperial mythology declares the emperor to be nothing less than a “son of god” by virtue of his lineage. This was a culture where the emperor’s preeminence was embedded, legitimized and defended by socio-economic, political and military structures. These early believers lived in the face of an ideology exalting Rome’s superiority as a force of good and order, with its famous Pax Romana.This is what Paul referred to when he wrote of “thrones…dominions…rulers or powers” (v. 16).

It was into this world that Paul wrote of Jesus as “the image of the invisible God” (v. 15), God’s complete likeness. Into this world, Paul says Christ is “the firstborn of all creation” (v. 15), emphasizing Jesus’ priority of rank as over and above creation. Into this world, Paul dares to proclaim not only that “all things in heaven and on earth were created…through him and for him,” describing Christ as the final goal: all things being created toward him. Then Paul specifies that all “thrones,” “dominions,” “rulers,” and “powers” are subject to Christ’s rule (v. 18).  Paul dares to claim that Christ is “before all things, and in him all things hold together” (v. 17).  The He here is emphatic, meaning he himself- and no other. Christ is also the cosmic glue. The universe is subsumed under Christ and contained within Christ. Creation is maintained in him.

Jesus is all in all. Because of his resurrection, he is the one who will come to “have first place in everything” (v. 18). He is superior to everything. Relating Christ to creation affirms that creation is not by its nature evil. It also affirms that Christ is the total and not partial Redeemer. There are no forces beyond his saving work.

The second section of our reading concerns Christ and his role in the church. And the “alls” continue. First of all, “In [Christ] ALL the fullness of God was pleased to dwell” (v. 19). Because of this, “through him God was pleased to reconcile to himself ALL things” (v. 20). God’s reconciliation includes earthly and heavenly things—all of creation. How is this done? “By making peace through the blood of his cross” (v. 20).

What does it mean that “all the fullness” of God dwells in Christ? Jesus is the expression and embodiment of God’s own being. He is the agent through whom God reconciled all things to God via the cross. Paul declares that through the event of the cross, God has restored an equilibrium to all creation.

In an empire that views itself or the emperor himself as the “head” of the body-politic, Paul tells this little community of Jesus’ followers that Christ “is the head of the body, the church” (v. 18). Here “he” is again emphatic—he himself, he and no other. Christ, not Rome, not the emperor is the head, the source, the ruler of the body. And this body is the church! Just as Jesus replaces Caesar, so does the church, replace empire!

The Pax Romana was always proclaimed as the great accomplishment of the empire. How did Rome maintain the peace? On crosses littering the landscape, the peace was established and secured through the eradication of all opposition. Paul turns the imperial cruelty on its head and says Jesus achieves his Lordship, demonstrates he is the One in whom the fullness of God dwells and “reconcile[s] to himself all things” by “making peace through the blood of his cross” (v. 20). Jesus’ kingdom is born of blood, but it is the blood of its Lord.

The cosmic Christ is Wisdom incarnate. But there is one huge difference between Wisdom in Proverbs and Christ in Colossians: Christ suffers death. He bears his cross for the sake of the world. Jesus’ atonement has the purpose of peacemaking and reconciliation. God’s reconciliation through Christ includes nature. It must also include the fate of the whole cosmos. Jesus must be Lord of each very specific life on earth and simultaneously be responsible for and committed to the nearly infinite details of the universe.

As Jesus was the firstborn of all creation (v. 15), so too is he “the firstborn from the dead” (v. 18). This hymn makes clear that Jesus didn’t stay dead. Jesus was raised from the dead! This connects Christ across time and space with all who have lived, whether they were human or whether they were creatures now extinct. In the mystery of Christ, all things are present to God.

Christ’s all-encompassing salvation is not just for us individually or our families and neighbors. Jesus’ Lordship must save us from commercialism that tries to convince us comfort and convenience are our kings and queens. Mortgages and markets must not ultimately control or own us. Jesus must be Lord for the whole economic system that pretends it can persist in depleting a finite earth. Just look at the example of the fires in the Amazon rain forest. Humanity thinks it can continue clearing trees from there without any consequences. But the lungs of the earth are being affected.

We must proclaim that Jesus is Lord of the sad, divisive politics we are now facing, not just in claiming votes of those who believe a candidate is chosen by God, but Jesus is redeeming even those we deem irredeemable. No rulers or powers are outside his reach.

In another aspect of God’s realm, Jesus is Lord of zoology, climatology and astronomy. In previous weeks, we’ve seen God delighting in beastly monsters and abundant animals and even commanding the weather. Jesus must be Lord not only of gorgeous sunsets over serene lakes, but also in redeeming toxic waste and bringing good, raising new life from landfills.

Jesus is also Lord of the nebulae and galactic clusters farther away than our best telescopes can see. As Lord, Jesus must be expected to bring newness not only out of supernovas, but to also pull life out of black holes and the cold, lonely distance of expanding deterioration.

If “all things” were made though Christ, then his resurrection marks the beginning of the NEW creation, the world’s resurrection! We are included in all those alls.

May the God of all things, lead us all in all peace through all the times when everything seems to fall apart, that we may live in all harmony with God, all our neighbors and all our world. Amen.