The God of Angel Armies 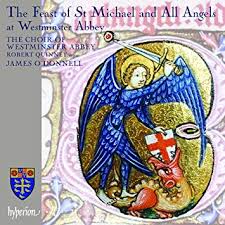 Since the fifth century, there has been a festival dedicated to the honor of the archangel Michael. The focus of the day has broadened to include thanksgiving for all the angels, seen as messengers of the word and will of God. On this festival day, we hear about demons, Satan falling from heaven, the “power of the enemy,” and the submission of spirits. There is a whole realm of spiritual beings that is assumed. In this case, those related to evil. The other lessons for today speak about Michael and the other angels in this other realm.

This gospel text begins and ends with joy. It is joy that characterized the disciples’ experience. Their joy foreshadows the joy they’d experience at the resurrection (24:41, 52).

The phrase “in your name,” used by the seventy, indicates the sphere of authority for their work of exorcism. It also signifies their genuine identification with Jesus.

But who is this Satan Jesus talks about? He is God’s supernatural enemy, the chief of the diabolic forces opposed to God’s purpose. In Isaiah, we’re told that his claim to glory and allegiance mandated his fall (14:13). His minions were described as “snakes and scorpions.” In Luke, the enemy is identified as the cosmic power of evil resident and active behind all forms of opposition to God and God’s people (Green).

When Jesus speaks of Satan’s fall, he uses a simile “as lightening.” Does lightning fall from heaven just once in a storm? It is an event that has many “falls.” Did Satan’s complete “fall” occur at that time? Is Jesus still seeing Satan fall in our ministries in his name? I believe he does.

But our gospel also relates to angels, since the basic meaning of the word from both Hebrew and Greek is “messenger.” These disciples had been sent out as “messengers,” “angels.” The kind of authority Jesus gave his disciples was such that it was even greater than that of the demons.

Are you wondering if Jesus is talking about literal snakes and scorpions? Not really. Snakes and scorpions are examples of the hostility in the creation that is defeated by Jesus. Their images represent the power of evil in prophetic and apocalyptic writings in the Old and New Testaments. The use of battle imagery shows who the kingdom fights against.

And I wonder, what are we to make of Jesus’ words to the disciples that nothing would hurt them. That “nothing” is absolute. It’s an emphatic double negative in the Greek text. In scripture and history, we see examples of God’s people being delivered from evil forces and people. However, we also see those who were martyred for their faith. But Jesus said, “Nothing will hurt you” (v. 19). Another way that phrase can be translated is “In nothing will he [the enemy] hurt you.” This clarifies things a bit since Jesus and the disciples were subject to physical injury through persecution, even though they may have been protected from Satan’s power. This does not mean that God’s people would not suffer and die or struggle with various issues. What it does mean is that God would be with them through it and that God’s messengers, the angels, would be with them. From the perspective of the cross and resurrection, we can say that death, in all its forms, will not have the last word.

The verb for “joy” is present tense imperative, meaning, “Continue to rejoice” or “Keep on rejoicing.” This implies an ongoing, rather than a momentary attitude. Joy, however, can be misplaced. It is not to be based on the authority Jesus gave them over evil spirits or the miracles they had performed. The power the disciples experienced, after all, was not their own but was because they were sent out in the power and authority of Jesus. Their joy was to be based upon their relationship with heaven, where their names had been written. Because of the tense of the Greek for “written” stressing a present reality of that which was a completed action, we might say their names were etched in heavenly stone.

Now I have to admit, it is pretty cool when God fights for us and we are delivered from dangerous situations. However, relationship with the Creator, Redeemer and Sustainer of us all, is where true joy was to be found.

German martyr, Dietrich Bonhoeffer, commissioned his students in the underground church to go forth into the Third Reich and proclaim the gospel while facing the possibility of death. He distinguished between cheap grace and costly grace, the grace truly from Christ. Cheap grace, he said, expects endless pleasantness and is unwilling to confront powers and principalities. True grace knows the cross is part of life in Christ.

Are there snakes and scorpions in the church today? Can they be interpreted as people, times and experiences that confront us as Christians? Scorpions may look with their eyes, but sting with their tails. And snakes seem sly and cunning as they slither around. This may be a helpful metaphor for the bad things that challenge our lives. Jesus has given authority over the power of the enemy, yet we feel vulnerable and even doubt that we have any power. When God takes hold of us and doesn’t let go, in spite of our doubts and fears, we’re surprised. When in the face of scorpions and snakes, the experience of the deep love of God strengthens and empowers us over and over, we slowly begin to trust that God is able. In this strange passage, we see a glimmer of a powerful God who has come down to walk with us, to love us, to carry us when we need to be carried, and even to write our names in heaven.

I had a similar experience in my last year of ministry in Portville. The church could no longer afford a full-time pastor and I had to discern if I was to stay there part-time or move on to somewhere else. Most of the people were wonderful and I was torn. The council president had made the previous pastor’s life miserable and he was working hard to do the same with mine. This impacted Ray and me and our relationship as well. I was feeling forlorn and I cried a lot. Then there was a song that kept playing on the Christian radio station that wouldn’t leave my thoughts. Over and over these words would go through my head:

After much praying and crying and wondering, God gave us an answer…and here we are. I still had to go through this difficult time. God wouldn’t take me over it or around it. What carried me through was knowing that God and his angels were surrounding me. God was carrying me when I couldn’t walk. Even in the middle of the awfulness, way down deep, was joy. Someone was fighting for me.

This form of salvation—deliverance from the power of darkness, of Satan is prominent in Acts. We also find this in Luther’s writings. In The Small Catechism, concerning the gifts or benefits of baptism, Martin Luther writes, “[baptism] brings about forgiveness of sins, redeems from death and the devil, and gives eternal salvation to all who believe it, as the words and promise of God declare.”

In the midst of the dark times, we go through individually, as a family, church or nation; we are not alone. We are surrounded by God and God’s army of angels. In Ephesians, Paul writes, “For our struggle is not against enemies of blood and flesh, but against the rulers, against the authorities, against the cosmic powers of this present darkness, against the spiritual forces of evil in the heavenly places” (Eph. 6:12).

For us today, the story of the seventy must be our story, as our faith community joins those continually sent out by Jesus. Like the seventy, God goes with us and gives us the gospel of peace. There will be snakes and scorpions along the way, but there will also be people to heal and believers to baptize. We may risk the condemnation of friends, neighbors and family for a just cause. And we may sacrifice material well-being for our principles. But “[we] know who goes before [us], [we] know who stands behind. The God of angel armies is always by [our] side.”

And what God has done for us in Christ is cause for great joy! Amen!