As I was preparing for worship today, there was a song was going through my mind, one I don’t even like. It’s “Freedom” by Richie Havens. I guess it has stayed with me because of the repetition of the word “freedom.” Some of the other lyrics are haunting as well: “Sometimes I feel like a motherless child” and “Sometimes I feel like I'm almost gone.” But of course, what is remembered the most is the word “freedom” that echoes throughout.
As Americans, freedom is a concept we’re very familiar with. We fought for freedom from the British to form our own nation. Throughout our history, we have fought on behalf of others for their freedom from oppression. We have parades on various patriotic holidays to help us celebrate our liberty from oppression. 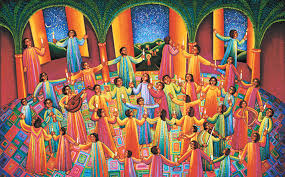 We know a lot about freedom… or do we? Just what is the kind of freedom Jesus is talking about in today’s gospel text?
This passage begins in a curious fashion referring to the Jews who had believed in Jesus. But what about the Jewish groups like the Pharisees who were always trying to trip up Jesus? There are several meanings for the word translated Jews. Here it refers to the Jewish people in Jerusalem who had been listening to Jesus' teaching in the temple and had believed his claim to be the Messiah. So this group already believed in Jesus, but the exchange between them has an odd twist.
Jesus said to them, "If you continue in my word, you are truly my disciples; and you will know the truth, and the truth will make you free." There are two unusual things about this statement. First, if they were already believers in Jesus, wouldn’t they already be disciples who knew the truth? Are there levels of discipleship? Is Jesus saying that there are those that follow from a distance and those that follow more closely? Are we among those who casually follow Jesus or are we seeking to continue in Jesus’ word to truly be his disciples? I believe that here Jesus was challenging those Jews who believed and that he is challenging us today as well about how committed we are to discipleship.
And just what is truth? In our day, isn’t truth considered relative? What’s true for you may not be true for me and vice versa. Truth here refers to the revelation of God that Jesus brings or perhaps, to Jesus himself for what he actually is as the revelation of God according to one scholar.

Another curious thing is the way the Jews respond to Jesus’ statement. Jesus speaks of spiritual freedom and they understand it as political freedom. Have you ever had disconnects in conversations where you’re just not on the same page? This happened to us regularly when we would order pizza from various places in Gettysburg. If the delivery person didn’t know anything about the seminary, we would eventually get a call. “Hello, I’m here at Gettysburg College, where are you?” Well, we don’t live at Gettysburg College but at the seminary. “Did you say you’re at the cemetery?” No, not the cemetery, the seminary! We had finally found one pizza place that could always find us, so it’s the only one we ordered from.
These Jewish believers were not on the same page as Jesus. If Jesus is saying that the truth makes them free, then they would have to be in some kind of bondage, otherwise, there would be no need for freedom. They took offense at this and responded that they’d never been slaves of anyone. Oh really?? What about the story of Moses who set the Jewish people free from Egypt? And what about the time the people were taken into captivity in Babylon? And if that’s not enough, what about the fact that at the time of Jesus they were under Roman occupation? Never been slaves to anyone????
What is it about this freedom Jesus offers that is so different? One writer suggests:
Only in this passage does "freedom" language appear in John. Jesus' mention of freedom offends his hearers, who insist they have always enjoyed freedom (even though, ironically, Jesus and his Jewish contemporaries live under Roman rule). But Jesus contends that without him they live as slaves. First, they are enslaved to sin, living as oppressed people. Second, this slavery relegates them to inferior status; because of it they cannot claim a permanent place or identity in God's family. Jesus then shifts his household metaphor to suggest that, as "Son," only he can ensure true freedom and secure membership in God's family. (Matt Skinner, workingpreacher.org)
The sin to which they are enslaved is unbelief, not moral error. Sometimes we think because we don’t do awful things, we aren’t so bad. But we all struggle with unbelief from time to time.

How does Jesus’ claim apply to us? What should our response be? One commentator writes:
To take seriously Jesus' claims about setting us free is to take seriously the proposition that we are all enslaved to powers beyond our ability to master. Reformation Day offers a suitable occasion for considering the ways in which we often find ourselves enslaved to particular religious identities, heritages, and practices, all the while pretending that dwelling in those things is the same as dwelling in Jesus and his word.

Continuing in God’s word, being a disciple, knowing the truth and being set free is not about our heritages and practices. Truth in John’s gospel is the revelation of God in Christ. Discipleship is knowing the Truth. In fact it’s more than just knowing the truth; it’s the basis for living.
(Matt Skinner, workingpreacher.org)

So, we can look at what Jesus is saying as a type of equation: If you continue in my Word, then you are truly my disciples, you will know the truth, the truth will set you free. We are freed from slavery to sin, but we are also freed for something. Through remaining in or welcoming Jesus’ word, we know the reality about God and this reality is what frees us. We do not have to fear divine punishment. If we sin, and we will, the word assures us of forgiveness, not punishment for those who believe. This frees us to serve not only God but our neighbor.
Because of reformers long ago like Martin Luther, we have the freedom to read the Bible in our own language, the freedom to partake of both the body and blood of Christ in the Eucharist, the freedom to serve God as a pastor and be married and the list goes on. But mostly, as we gather together today as a community of faith, we celebrate the freedom in Christ that has brought us here to this place and made us brothers and sisters in Christ Jesus.
Amen.
picture