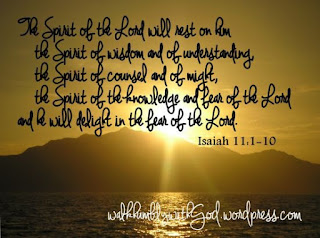 Who wouldn’t want to live in a paradise like the one Isaiah describes? It’s an unimaginable world! But it didn’t start out that way for the people of Israel.

Judah had been devastated. In Isaiah 6, it’s likened to a tree that’s been destroyed with only the stump remaining. But God had promised that there would be new life that would usher in a new age of righteousness and justice. This would not be limited to Israel alone, but is an ideal world for all people. Isaiah preaches hope in a time of terror and justice in a time of oppression.

The stump, which dominated the political situation, was the dynastic reign of King David’s family, which was believed to be the carrier of God’s goodness and faithfulness in the world. But the royal family disappointed its people and left them in despair.

God’s Spirit enters into this malaise. God’s wind has come to blow over the stump of death and discouragement. This is the life-giving, future-creating, world-forming, despair-ending Spirit of God. A tug of war was taking place between the stump of death and the spirit of life. Into this situation, God’s prophet Isaiah makes three life-altering announcements.

The first announcement is that of new life and a new king (vv. 1-5). We have an amazing description of this king and his rule. His character would be shaped by the Spirit. The king is provided with the necessary gifts for just rule by the Spirit, evoking true piety from the anointed one. The king’s administration concentrates on the establishment of justice (vv. 3b-5).  He assures that the poor and meek have full rights before the law. This anointed king does not judge by outer appearance, but has discernment to see into people’s hearts. Nor does he judge by hearsay. The character and administration of the king are those that the people had hoped for, but never fully realized.

The second announcement is one of peace and tranquility in the natural order. This cosmic peace is the consequence of the rise of the anointed king. This is not life, as we know it.  It’s like the Garden of Eden on steroids—this is a kingdom beyond anyone’s expectations. The wind of God’s Holy Spirit changes everything—even the natural order.

The third announcement concerns the anointed descendant of David. He will be a signal around which all nations will unite (v. 10). The place is God’s holy mountain in Jerusalem. The promise is that this is the resting place where the root of Jesse stands. The vision is one of security with the shoot as a sign for the nations. The standard is not the one for battle, but one of peace. The goal of this transformation is for humanity to live life without fear.

This prophetic picture is not a return to some ideal past, but the restoration of creation by a new act of God through a righteous ruler. Isaiah did not envision a return to a mythical age of primordial innocence, but a new act of creation which embraces the righteous will of God with the whole earth reflecting a reverent devotion “as water covers the sea.” (Brevard S. Childs, Isaiah).

I‘m sure you‘ve all heard the name Nelson Mandela, the first black president of South Africa, who spent 27 years in prison for trying to bring about racial equality in that country. The transformation of South Africa from a minority ruled country that embraced the enslavement of blacks to a society where black and white are equal is a transformation from predator and prey to peaceful partners forming a society together.

The system of apartheid was so deeply entrenched in South African society that no one believed that it would be dismantled and if it was to be dismantled, the ruling white minority was convinced that only a bloodbath would tear apartheid down. However, God gave Nelson Mandela the dream of a different future for his people, for all the people of South Africa. Once Nelson Mandela was released from prison, he could have taken the road to retribution and killing, but he chose to take the higher ground and followed the road of reconciliation, peace and harmony where black and white could live together and work together.

Like the peaceful kingdom of Isaiah, South Africa was transformed. Can we dare to dream that communities near and far can be made new? Can the Spirit work through us to bring about the kingdom Isaiah talks about here in Bemus Point, in Chautauqua County, in the New York State and beyond? For this to happen, we need to follow Jesus as the messianic king, to follow his teachings on loving one another and taking care of our neighbors and those who may not have as much as we do. Jesus, by the power of the Holy Spirit  calls us to turn our world upside down.

Is this transformation going to be easy? No. It is something we will have to work at. God is asking us to move out of our comfort zone and that is not an easy thing to do. When we are overwhelmed or when we are trying to make change where the odds seem stacked against us, we can succumb to the trappings of despair. God’s Advent word of hope comes to sit with us in our despair.

The fragile sign is God’s beginning where faith can break through the hardness of our disbelief. We may want to sit on the stump for a little while. God will sit there with us. But God will nudge us to look at the signs of life sprouting from our stump. Do you see that green shoot growing? It is God’s invitation into hopes and dreams and even adventures as we leave the familiar and go down paths untraveled.

The book, Advent Conspiracy, states that Americans spend 45 times as much in one Christmas as it would take to ensure that people all over the world have clean water. The concept of giving at Christmas has become a rat race of consumerism rather than giving from the heart. We need to move away from such consumption to an attitude of caring for our brothers and sisters. We can do this through gifts for ELCA World Hunger. Purchase one or more of the ELCA’s Good Gifts to help families to become self-sufficient.

Then there is the blight of addiction that devastates our county. The Addiction Response Ministry has been working with other organizations and agencies to impact this issue. There are many plans and dreams God brought to our minds when we met together as a board for a retreat at LCLC. I invite you to invest in this ministry that has partnered with those ministering in prisons, inpatient chemical dependency programs and in churches to help those battling addiction.

As a congregation, we are making a real impact on the world around us. I was amazed the first Sunday the GA Christmas tree was up with tags for the children’s needs. By the time I got to the tree, all of the tags had been taken! When the woman from GA came to collect everything on Thursday, she expressed how much the relationship we have with them means. And they are going through a time of change. The children will all be sent to other places for a number of reasons. Please keep these children in your prayers. This could have a negative impact on them.

We need to keep in mind that recipients of our gifts are not the poor or less fortunate people, but are our neighbors. Like our Lord, we are led by the wind of God’s Spirit. Our Christ-like behavior will win over curious outsiders.

The new possibilities God gives us depend on the wind, that which the stump could not resist. The wind is blowing. Advent is our decision to trust the new wind against the hopeless stump of what has failed. Do you feel the wind of the Spirit blowing?

By the grace of God,
may we embody the hope
of the shoot sprouting green,
knowing the power of renewal in our bones,
resurrection even in our very cells.
Amen.  (Emma Allen, revgalblogpals.org)