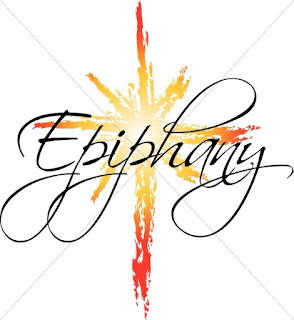 What in the world is Epiphany and why do we celebrate it? Epiphany means "showing forth." It names the day that the church tells Matthew's story of the magi from foreign lands who follow the light of the star and "see" Jesus as Christ. This is important because this acknowledges that the greatest gift given by the God who comes down to be with His people, is to be shared by Jew and Gentile alike. The irony here is the wise men who were not Jewish scholars were the first to recognize the sign of the star in the sky and the importance of its meaning. It's commonly believed that the star would have also been seen in Jerusalem and Judea but somehow the Jewish scholars were asleep in the temple. Even if they saw it, they either ignored it or didn't look in the Jewish scriptures to find out what it meant. More importantly, if they did understand what it meant, they were not sharing this news with anyone. Do you see the contrast: the rich and powerful know the news and don't share it and yet the lower class understands the news and tells everyone?

In our modern celebration of the magi's visit, we have it all rolled up into one event that occurs while Jesus is still in the manger. However, in reality a significant amount of time, roughly two years has passed between the birth of Jesus and the arrival of these foreign visitors. The shepherds are back to work. Mary, Joseph and Jesus are in a house. Herod's paranoia will soon lead him to destroy all Bethlehem's children who are two years old and younger.

The magi were star gazers and likely astrologers who may have been Zoroastrian priests. There was a common belief that when a significant event, like the birth of a king occurred, it would be reflected in the sky. The stars themselves bore witness to the birth of Christ, so the magi followed the star to a land far from their own.

Why would the magi go to Jerusalem before going to Bethlehem? Did the star direct them there? Matthew only speaks of the star leading the magi to Bethlehem. But, if a new king was born, wouldn't they expect him to be in the capital, with the royal family? That just made sense, so they first went to Jerusalem. No new king was there and there is only room for one king and in Jerusalem, it was Herod.

The magi asked, “Where is the child who has been born king of the Jews?” (V. 2). What does king of the Jews mean? The magi's question is a reminder that Jesus is the royal heir to the promises made to King David so many years before. It also prefigures Jesus' ministry proclaiming the kingdom of God and especially the passion story where Jesus is crucified as the "King of the Jews" (27:11, 29, 37).

It was the religious professionals, not King Herod who were able to direct the magi to Bethlehem. The magi had a partial revelation through nature. By the addition of the scripture from the Old Testament, the magi are guided not only by pagan astrology, but by Jewish Scripture, which fully disclosed what pagan astrology could not answer.

God always meets people where they are at and he did so with the magi. God got their attention through a sign in the sky because God is the God who always comes down to people.

Herod claimed he wanted to know where Jesus was so he could pay him homage and worship him. But if King Herod and the religious leaders knew where the king was to be born and if they really wanted to worship him, why didn't they go along with the magi to Bethlehem or better yet, why weren't they already there? One theologian, Warren Carter (Matthew and the Margins) suggests, "The powerful center resists God's purposes, while the lowly... and marginal... embrace them" (p. 80).

With the information that they needed to go to Bethlehem, the magi reconnected with the astronomical gps that led them to the very house where Jesus and his family were living.

How did the characters in today's gospel respond to Jesus? Herod felt threatened while the magi responded with expectation. After all, Herod was the one who was the king of the Jews. He added to the Jewish temple to ensure his position and to win favor with the people. In ancient days, it was believed that monarchs were supposed to insure safety for their subjects. And how did Herod ensure the safety of his people? He ordered the death of all male infants two years and younger that lived in Bethlehem.  Christ, not Herod, is the true king who gives life, rather than death to the people.

Matthew's magi represent the Gentiles, outsiders to the promises made to the Jewish people. Their response to Jesus was to recognize him as the son of God and King of Kings. They are portrayed as the first to pay homage to the King of the Jews. The gifts they brought were fit for a king. They are symbols--gold to honor Jesus as King, frankincense because they worship Jesus as divine, and myrrh in preparation for Jesus' death.

Jesus' birth is of cosmic and astronomical importance for ALL people. It is good news for all who wish to participate in God's radically inclusive love and grace. But it is not good news for those who crave power over and against others.

My internship year of seminary was spent in Petersburg, West Virginia. We lived in the parsonage next door to Grace Lutheran Church. The neighbors on the other side of the house had an observatory in their back yard. From that small building, housing a telescope, our neighbors could observe the stars. But I don't know that anything they saw would be so significant to cause them to pack up and travel to a far away place to worship a small King. "Epiphany is a celebration of the unfathomable gift of the birth of Jesus--and of the new possibilities that exist for the human race because of this gift of God for us" (Kathleen Cannon, O. P., in Homilies for the Christian People, p. 394).

What is our response to God's light? Are we terrified by the birth of Christ? And do we want to stick our head in the sand and ignore it and keep it to ourselves? Or do we acknowledge his birth and respond with joy and expectation? And do we recognize its greatness and want to tell everyone about it?

These new possibilities are too wonderful to keep to ourselves. Have we ever experienced such events in our lives that literally move us to do something as drastic as the magi did? In our everyday life, whether we are working or retired or are students, we meet people. Like the magi long ago, our first calling is to be who God made us to be. Then we need to keep our eyes and ears and hearts open to when we are called to step out in faith--taking God's gifts to their natural conclusions. Such times will come and when they do, we will encounter God, maybe in unexpected ways or in unexpected places. Our lives will never be the same again.

Have you seen any bright stars in the sky lately?