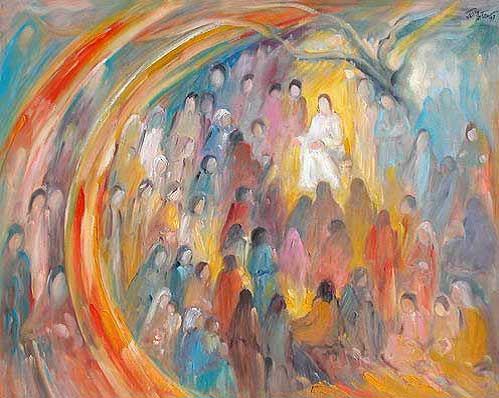 What is meant by “having it made” or “living the dream?” We all have thoughts about what that means and we usually don’t think of the poor in spirit, those who mourn, the meek or pure in heart, of those who thirst for righteousness. In our world, when we think of someone being blessed, it may mean wealth, power, fame, success or beauty. Blessing, according to the standards of this world, is often of the material kind.

Just what is a beatitude? They are not just some moral commandments—if we do, then God does. They are blessings promised by God to those who already have what the beatitude describes: poor in spirit, mourning, meek and so on. They serve as an invitation to come into the grace God offers (New English Translation, notes).

In looking at the beatitudes we need to think about who Jesus is addressing. Here, Jesus is only speaking to his disciples. Jesus had withdrawn to a mountain to be alone with them and to teach them. The first thing He taught them is how to recognize blessedness—not how to become blessed or to even bless each other, but to recognize who is already blessed by God. It’s not necessarily who we would normally expect.

Blessed is one of those churchy, religious words that we may understand, but isn’t there some other way it can be said? “Happy” is one meaning and yet when substituted here for blessed, it seems lacking. “Fortunate” or “it will be well with” may convey the point better than “blessed” or “happy.”

Who are the poor in spirit in the first beatitude? They are literally poor but are also those without arrogance and the sense of their own need. Their blessing? “Theirs is the kingdom of heaven.” Jesus presents the nature of the life of the kingdom he proclaims and represents a reversed idea of human kingship. Those to whom his kingdom belongs correspond to this future end-time reversal.

The mourning of the second beatitude does not refer as much to individual mourning over loss as it refers to the lament of the true people of God over the present condition of God’s people and God’s program in the world.

We may think of meekness as weakness, but in the third beatitude it can have a positive sense of "humble" or "gentle," but can also have the negative sense "humiliated" "walked on," "the doormats," "the powerless." The earth is not a reward for them because it is something inherited (Brian Stoffregen, crossmarks.com).

In the fourth beatitude, Jesus blesses those who hunger. These are like the poor Jesus has already mentioned. Matthew emphasizes yearning for God’s righteousness more than for food and drink. This probably includes a yearning for God’s justice, for his vindication of the oppressed It also includes yearning to do God’s will (IVP New Testament Commentary Series).

Who are the merciful of the fifth beatitude? Basically, they are healers, people who seek to put right that which has gone wrong. They favor the removal of everything that prevents life from being as God intends: poverty, ostracism, hunger, disease, demons, debt (Mark Allan Powell, God With Us: A Pastoral Theology of Matthew’s Gospel). The merciful will receive mercy. They will be treated with mercy on the final day of judgment, but it may simply mean that they will see mercy prevail, not only for themselves but also for those on whose behalf they have sought it (Powell).

In scripture, the word for heart represents the true self, what one really is without pretense. The real accent in Matthew’s sixth beatitude is integrity. To be pure in heart is to have a single-hearted passion for God. Their blessing is that “they will see God.” “Those who see God are those in whom something of God has been seen” (Powell).

Peacemakers are agents of God who are actively working for the wholeness and well-being that is God’s will for a broken world. In Matthew, people are called God’s children when they behave in a way that is similar to God’s own.

Righteousness is our human activity to participate in what God is doing. Persecution is not what is being promoted in the last beatitudes, but commitment.

Jesus reversed the general value system of his time and our own by pronouncing a blessing on the poor, the hungry, and those who weep. They are the ones who are fortunate, happy, in a privileged situation and well-off. All of the beatitudes apply to one group—the real Christians of Matthew’s community. They do not describe nine different types of good people who get to go to heaven but are nine declarations about the blessedness, contrary to all appearances, of the future community living in anticipation of God’s reign.

Like all else in Matthew, the beatitudes are oriented to life together in the community of discipleship, not to individualistic ethics. A community that hears itself pronounced blessed by the Lord does not remain passive but acts in accord with the coming kingdom.

Each beatitude begins in the present tense, “Blessed are” and moves to the future tense, “for they will.” The present tense shows us that they are expressions of what is already true about the Christian community. Blessings are in the future, but not entirely. There is some realization in the present. It is the now/not yet of the kingdom of God.

The beatitudes bring into being the reality they declare. Their fulfillment is not dependent upon human actions. These are not some entrance requirements for outsiders, but a declaration about insiders. And the best part is that the truth of a beatitude is not independently true, but dependent upon the speaker—Jesus! They are true based on the authority of the one who speaks.

When God’s kingdom comes and God’s will is done, no one will have to be poor in spirit, mourn, be meek, or hunger and thirst for righteousness or justice. Everyone who is ruled by God’s will is merciful, pure in heart, committed to peacemaking and willing to suffer for the sake of righteousness and justice (Powell).

Do we recognize those we don’t often perceive as valuable to be those God chooses to bless and honor and love? How valuable to God are the drug addicts, the homeless, the refugees or any others we really don’t understand? We may not fathom why they live the lives they do or how they got so far down. Does this make them any less loved by God? And all these foreigners! Why don’t they just learn to speak English if they live in America? Aren’t all of these precious in God’s eyes?

In our congregation and every other, we can find people of meekness, ministers of mercy and workers for peace. Their presence and activity among us is a sign of God’s blessing and a call to us all to conform our corporate life more to kingdom values.

The beatitudes resist all notions for Christianity as a mere philosophy designed to make people successful, happy and calm today. Instead, Christian faith is a way of living based on the firm and sure hope that meekness is the way of God, that righteousness and peace will finally prevail and that God’s future will be a time of mercy and not cruelty (M. Eugene Boring, The New Interpreter’s Bible, Volume VIII, Matthew).

What would it be like if we became a place where we recognized that God always comes where we least expect God to be—amid our brokenness—in order to bless that which the world refuses to bless, to love what the world calls unlovable and to redeem that which the world does not believe deserves saving? What would it be like if we left here with new eyes, able to perceive in the needs of our neighbor not a nuisance or something to be pitied, but rather the marks of blessedness to which we are privileged? (David Lose, davidlose.net). So, blessed are those who live this life now, even when such a life seems foolish, they will, in the end, be vindicated by God. Rejoice and be glad!.