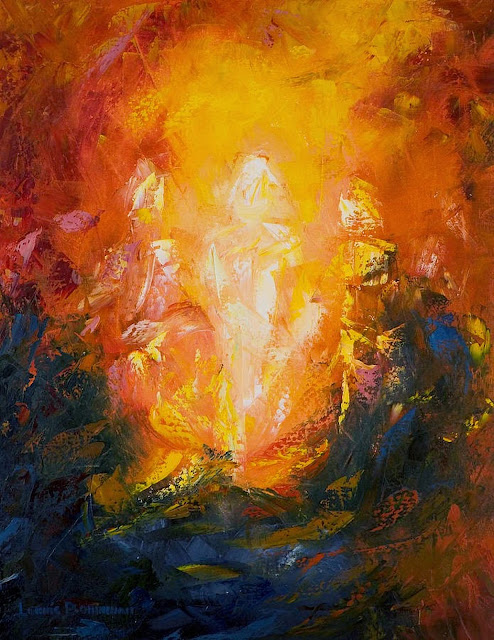 The season of Epiphany begins and ends with a heavenly voice in Jesus’ baptism and Transfiguration, making Jesus known to the world. After all, Epiphany means “to make known.”

The Transfiguration marks the midpoint in a series of scenes that define who Jesus is. At both his baptism  and transfiguration, we hear the heavenly voice announcing that he is God’s Son. At his temptation, in Gethsemane and at his crucifixion, Jesus struggles with the humiliation, suffering and abandonment that he, as God’s Son, must endure. Finally, the resurrected Christ claims his identity, sending his disciples out to teach and baptize in the name of the Father, the Son and the Holy Spirit (Judith Jones, workingpreacher.org).

It’s easy to get caught up in the special effects in movies and other stories. Such things can either enhance or distract from the story line. There are special effects aplenty in today’s gospel. There is more to be known about what is really real than the eye can see.

The last verse of Matthew 16 says, “…there are some standing here who will not taste death before they see the Son of Man coming in his kingdom.” Then, Matthew tells us “Six days later…” is when the Transfiguration occurred, when three of the disciples saw that glory, six days after Jesus first told his disciples that he must go to Jerusalem to be crucified.

Jesus took them up a high mountain. Important events happen on mountains in Matthew: the Sermon on the Mount (5:1), where Jesus went to be alone to pray (14:23), where crowds came to be healed by Jesus (15:29) and where the risen Christ meets the eleven disciples, giving them the Great Commission (28:16) (Brian Stoffregen, crossmarks.com).

Among the special effects of the Transfiguration is Shiny Jesus. “His face shone like the sun, and his clothes became dazzling white” (v. 2). He radiates light. Then, great heroes of the faith, Moses and Elijah, enter the scene, representing the heavenly world and speak with the transfigured Jesus. Both characters are believed in Judaism to have been carried up to heaven (Ulrich Luz, Matthew 8-20: A Commentary on Matthew).

This is the first time the three disciples are set apart in Matthew. The next time is when Jesus takes them along to the Garden of Gethsemane (26:37). Those who beheld his heavenly glory also witness his earthly agony.

God has revealed to Peter and the other two disciples who Jesus is: the glorified, beloved Son of God, but this doesn’t help Peter understand what he should do. Peter likes what is happening on the mountain, offering to build huts for Moses, Elijah and Jesus. Peter calls Jesus “Lord,” a title indicating faith. Peter is deferential, saying, “if you will” to Jesus. There is nothing telling us Peter is afraid or does not know what he is saying as there are in the other gospel accounts. He wants to build booths [as if he can contain the divine!]. God wants him to listen---so much so that…

God interrupts Peter’s reverie. “While he was still speaking,” they were enveloped by a cloud (a sign of God’s presence in scripture) and a voice said, “This is my Son, the Beloved; with him I am well pleased; listen to him!” We have heard these words elsewhere in Matthew, when Jesus was baptized. Remember though that Peter, James and John were not at Jesus’ baptism, so this was new to them. It’s verbatim except for the addition of the words, “listen to him!” Moses and Elijah may be important, but their weight pales in comparison to God’s Son, the One the disciples were called to listen to.

The tense of “listen” implies continual or repeated actions. “Keep on listening to him” or “continue to listen to him.” In the Old Testament God gave Ten Commandments; here we are given one (Stoffregen).

Mountains and clouds appear aplenty in the Old Testament. This scene recalls Elijah’s encounter with God on the holy mountain and the tent where Moses met with God. It was on a mountain that God gave the Ten Commandments to Moses.

No wonder the three disciples were overcome with fear. Wouldn’t you be—clouds and voices on a mountain!? They could not bear to hear the Father speak from the cloud, but they can listen to Jesus. The message comes filtered through the words and actions of Jesus.

Jesus does not scold the disciples for unbelief and fear. As a friend would, he touches them, the action used throughout the healing accounts in scripture. Then he tells them to get up and to not be afraid. Jesus calls them to be raised and to shed their fear, sending them into life restored and renewed.

The disciples only saw Jesus when they looked up. They must have wondered if they’d been dreaming. Had it been real? All they saw now was Jesus and that is enough. In Jesus they see God embodied, God that can be touched and held and loved—not shiny Jesus, but regular Jesus.

Listening must be followed by doing. To listen then, is to understand and live by taking up ones’ cross. It is a certain quality of discipleship. Listening and taking up the cross, means following Jesus down the mountain to where the needs were.

God makes us his own in holy baptism. God declares we are “sealed by the Holy Spirit and marked with the cross of Christ forever” (ELW, p. 231). God reveals his Son to us as we read God’s word, pray, worship and fellowship with God’s people. The Father feeds us with the bread of the holy supper.

The Greek word for “transfigured” is the one we get metamorphosis from. Paul uses it when he writes of the transformation that is to take place within us. It’s like the change a caterpillar undergoes to become a butterfly.

When we are seeing and hearing only Jesus, then we are prepared for mission. Jesus transformed the disciples from fearful, anxious, inactive, cowards to brave, confident, active champions of the faith. How we need this healing, life-giving, transforming touch from Christ! We can then be simple human beings offering a healing and life-giving touch to the scared, worried, anxious people whom we meet day to day.

What is our mission? The disciples followed Jesus and found theirs. As individuals and as a church we need to follow and listen to Jesus. God has good things in mind for us, but we need to listen to find out what they are.

We will be focusing on hearing what the Father is speaking to us concerning our future as St. Timothy during Lent. What might our congregation look like in the near and distant future? What is God’s desired outcome for us? Together we want to discern that and do the things that line us up with that future. It’s one thing to have the vision of God’s will. It’s quite another to carry it out.

There are obvious things we can do to carry out the mission of Christ: share the good news in word and deed—feed the hungry, clothe the naked, heal the sick, house the homeless and so on. Jesus’ transfiguration needs to become our transformation—not that we are to shine like Jesus, but that we are to be transformed in our thinking about Jesus, about his mission and our mission to the world. Then we know the need to come down from the hill, to be the human presence of Jesus to the fearful, offering the touch of new life to help the cowering stand tall (Stoffregen).

Our gospel text rings out the victory cry of resurrection, the call to courage and the promise of new abundant life. God’s Word is living and active, able to raise the dead to life and more than capable of equipping us with courage and compassion sufficient to the challenges and opportunities of the day (David Lose, workingpreacher.org).