August 22, 2020
This is the sermon I'll be preaching tomorrow at St. Timothy Lutheran Church's Drive-In Worship. If you live in the area, please join us. The text is the gospel, Matthew 16:13-20. 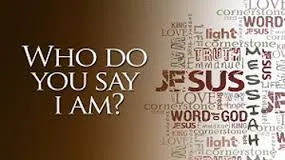 Caesarea Philippi is beautiful. It is lush and green with a spring that is a source for the Jordan River. Situated at the foot of Mt. Hermon, which is the only place in the land where you will find snow, in which my then young children played.

The Arab people call it Banyas, going back to the time when it was named for the Greek god, Pan. There is no "p" in Arabic. It has a long history of polytheism—from the god Baal of the Old Testament to the Greek god Pan, to Caesar, who was worshiped as a "son of a god." In this pantheon of gods, Jesus asks who people are saying that he is.

Jesus has a question. “Who are people saying that I am?” The Greek language, in which the New Testament was written, indicates the action was continual, not once and done. As I hear Jesus’ words, it reminds me of the song from “Jesus Christ Superstar,” “What’s the buzz, tell me what’s a happenin.’” Jesus already knew what people were saying. He didn’t need the disciples’ answer, but he wanted them to think intentionally in this place surrounded by gods and dead politicians about the word on the street.

The answers are typical of that day. John the Baptist makes us think of Herod and how he thought Jesus might be John come back to life. This speaks to resurrection. Elijah is part of the mix because he did not die, but was taken up into heaven in a chariot. No one is sure about the mentioning of Jeremiah, except that perhaps because of his prophecy to give the people a new covenant, which did come through the Lord Jesus. As the weeping prophet, did it maybe pertain to Jesus’ coming sorrows; his torturous death?

Jesus has another question. "But who are you saying that I am?" If the disciples knew what people, in general, were saying, weren't they likely part of the conversation? So…what was your input, disciples? The "you" is plural like 'y’all” or as the Pittsburghers say, “y’ins.” Jesus was asking the disciples as a whole, so why does Peter answer?

It's not like he's the anxious kid in the classroom that knows the answer, raising his hand, making it go higher and higher so the teacher will pick him. Peter is the representative of the disciples and not only in this case. It was the case earlier in this gospel and continues. He speaks for them all.

“You are the Messiah, the Son of the living God.” A few weeks ago, when we heard about Peter and Jesus walking on water, the disciples’ response was, “Truly you are the Son of God.” The confession of Jesus being the Messiah though was a new piece of information. This is the first time in Matthew that happens.

Jesus blesses Peter. Peter got it right! This results in Jesus blessing Peter for being open to divine revelation. It was not Peter's brains or intuitiveness that brought him to that conclusion. It was a God-job and Peter was blessed because of his openness.

It is this confession of Christ’s identity upon which the church was built and Jesus promises that the gates of Hades, the gates of death will not prevail against it. Christ builds the church. Peter was given the keys and so are we to be the caretakers of the church. This includes the binding and loosing which has been interpreted in many ways throughout history. It may refer to the behavior of the people of God. For sure, God has called us to set the captives free, for this is one of the things the Messiah would be doing and we do in his name. As Luke records from Jesus’ first public message in his hometown, “The Spirit of the Lord is upon me, because he has anointed me to bring good news to the poor. He has sent me to proclaim release to the captives and recovery of sight to the blind, to let the oppressed go free” (Luke 4:18).

We have another question to answer, “Who is Jesus to us?” It’s all nice in the abstract. Jesus in the church, in a picture on the wall, in scripture, in the catechism, but the question Jesus is asking now is, “Who is Jesus to me, to you?” Jesus wants to personalize this for us. He wants us to internalize the question and to be open to divine revelation as Peter was. Jesus wants a relationship with us.

Does Jesus make a difference in our lives? What does this mean for us? Following Jesus may take us to places we’d rather not go: to hospitals to nurture those with Coronavirus, to march in protest of unjust policies toward minorities, to feed the hungry, to release those unjustly imprisoned. Or Jesus may lead us next door to safely visit with neighbors and share God’s love; the message of Jesus.

No matter where Jesus may lead, if you follow him it will be a wild ride. With all its highs and lows, following Jesus is a wonderful adventure. As Lutheran author, Dr. Seuss wrote, “Oh! The places you'll go! You'll be on your way up! You'll be seeing great sights! You'll join the high fliers who soar to high heights.” Amen.
picture